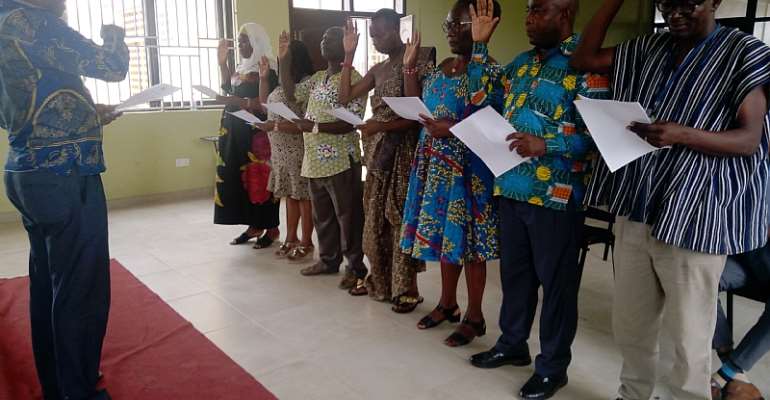 Their task was to ensure Ghana Statistical Service(GSS) achieve the 2020 population Census scheduled from 29th June to 12th July 2020 in the Municipality.

Addressing the gathering at the conference Hall of the Municipal Assembly, the Municipal Coordinating Director, Alhaji Mohammed Avona Akape said the exercise would involve a lot of work and therefore appealed to the members to work harder to the benefit of all.

He emphasized that Kasoa has been a bigger and difficult place hence the need for committee members to do their best in that regard.

He urged committee members to educate the public ahead of the census.

"We need your cooperation so that at the end we would not be found wanting" he stressed.

In a speech read by the Municipal Coordinating Director, Alhaji Mohammed Avona Akape on behalf of the Municipal Chief Executive, Hon. Michael Essuman Yaw Mensah, it underscored the importance of the meeting since it provided the needed platform for an interactive dialogue for users and producers for official statistics.

The speech indicated that United Nations has recommended every country should endeavour to take population census every ten years adding that a population and housing census was indispensable governance required to ensure that governance and democracy work for all.

He hinted that Ghana has a long history of population Census. The first haven taken place in 1891 in the colonial era and the last in 2010.

He stated the outcome of the census would go a long way to improve policy making in the Municipality.

Nothwithstanding, the population and housing data are critical and indispensable source of statistics in the implementation of decentralisation programmes. Indeed the importance of census data in developing planning and implementation cannot be over emphasised.

The inauguration of the Municipal Census Implementation Committee (MCIC) would marked the beginning of the field operation in the Municipality. In a strategic move to improve timeliness of operation, it was expected that the Assembly, Chiefs and the people would support every effort that Ghana Statistical Service (GSS) would make to that regard. We shall also mobilise our people to make themselves available during the census period.

Nonetheless we are working together and poised to make positive contribution to the implementation of 2020 population and housing census.

And as we share our experience in the 2020 census, the exercise would contribute towards building closer working relationship among the stakeholders in our Municipal towards improving the coordination and mobilisation of resources for the 2020 population housing census.

He assured all stakeholders that the Assembly and the chiefs and various groups are resorted to work to ensure a successful census.

The MCE's speech, urged all to avail themselves for the census.

He reminded the Municipal Census Implementation Committee (MCIC) members to be dedicated to the success of the census in Municipal since their success would be depended on the extent to which they would work and execute their task in collaboration with the four member technical team.