Rawlings, Kufuor Still Opposed to Each Other 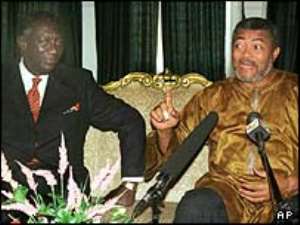 Despite frantic efforts being made by religious, traditional and opinion leaders to seal the long-standing rift between the former president and his successor, the two most prominent political personalities in the country seem to be as far apart as ever.

The latest 'situation report' made by Flt. Lt. Jerry John Rawlings in an interview with the British Broadcasting Corporation (BBC) yesterday indicates that the old wounds are still fresh.

Asked by the host of the dawn programme about what his relationship with President John Agyekum Kufuor was like, JJ said, " I have said this before, and I am saying it again.

That man and I are diametrically opposed politically, and in our social philosophies," stressing that he did not want to sound ungracious.

He said it was not true that he ever said that he had not been accorded the respect and dignity of a former president. And when reminded that it was reported in the local media a couple of times, Rawlings said he was not surprised because all kinds of things are reported in Ghana.

According to him, the present government, led by Kufuor, had paid a good number of media personnel to misinform and disinform the international community about the truth in the country.

The most controversial political figure, for the second time, accused key western media houses such as BBC, CNN and SKYY of having all participated in suppressing the impunity, deceit and nasty things that had been going on in the country, and painting Ghana as a shining example for all to follow.

"Well people report all kinds of things in Ghana. A good number of the media personnel are paid by Kufuor's regime to misinform and disinform the international community and you better listen to me Chief, that it is not only the ones in Ghana. BBC okay?, CNN, Sky etc, have all participated in suppressing the impunity, some of the deceit, some of the nasty things going on in my country in order to hoist and to fly the flag of Ghana as a good example for the rest of Africa; so that other African governments can take the cue from us in Ghana," he said.

According to him, the claims that many people disappeared during his military regimes were untrue. Incidentally, the ex-president, in the same breath, conceded that there were excesses at the time, but was quickly on the defensive when he said they took place in an unconstitutional era.

"A lot of those things are false, exaggerated situations. Besides, they did not happen in the constitutional era. They never happened under a constitutional order. They happened in the volcanic eruption when things were difficult to control. But I can assure you that whenever any such things came to our notice, we did not hesitate to deal with it."

For the umpteenth time, Rawlings insisted that the level of corruption and abuse of power in the government of the day had never been recorded in the annals of the history of the country."

When asked by the host to substantiate by giving a single example of his claims, he cited the 2002 murder of the Overlord of Dagbon, Ya Na Yakubu Andani II.

"I will dare any one of you to come to Ghana to investigate the killing of that king and forty of his subjects, as to whether any one single person was prosecuted. The massive levels and depths of corruption that have taken place in the Ghana today, we have never seen it in the history of Ghana before."

The ex-president intimated that he was not an angel, but that all the same, he respected morality.