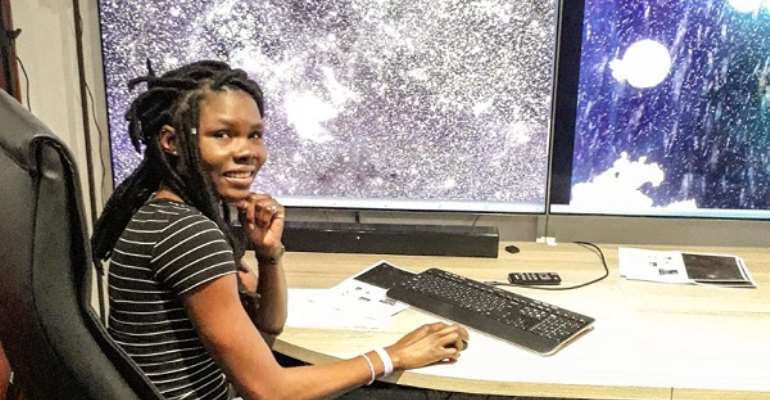 Marie Korsaga is the first female astrophysicist in West Africa.

This is a wonderful, beautiful interview about West Africa’s first female astrophysicist, Marie Korsaga, from Burkina Faso. This young woman breaks all the stereotypes. Much of our western culture does not appreciate science. Science, discoveries by the human mind, the power of hypothesis, is the driver of civilization’s growth. Science, not money, is the underlying source of economic value. Science demonstrates, and celebrates our uniquely human powers, which no other living creature possesses, or could ever posses. We are truly in the image of the Creator when we are exercising the higher scientific powers of our creative mind. I strongly believe that the world would be better off if we had more of youth becoming scientists (and engineers).

Excerpted questions and answers:
Where does your passion for astrophysics stem from?

From an early age, I have always been interested in the phenomena of the universe, such as the appearance of life on earth and shooting stars. I also enjoyed watching documentary films on astronomy, especially on the Apollo missions. But at the time, I never imagined that I would become an astrophysicist, because astronomy was an unknown domain in Burkina Faso. Besides, I had never met — let alone talked to — an astronomer in real life before my doing my degree.

Growing up, I intended to become a civil engineer because I also like construction. When I did my degree, astronomy had just been integrated as an optional subject in physics in Burkina Faso, and I seized this opportunity. My interest in scientific subjects allowed me to excel more easily in the subject and to pursue my postgraduate studies in astrophysics.

In a continent where there is a lack of water, electricity and even food, does opting for astrophysics ignore the fundamental problems facing the region?

Since astronomy is a science that requires a vast field of knowledge, it enables skills to be developed at the local level. For example, if you take the telescope construction project in South Africa, which is one of the biggest projects in astronomy, it was established by engineers, computer scientists, technicians. So, in addition to strict astronomy, skills are developed that can be used effectively in other sectors.

An astrophysicist is someone who is almost a complete all-rounder in science — someone who has skills in physics, engineering, programming. All this is what makes people describe astronomy as the mother of all sciences. As well as being fascinating as a science, astronomy can be used as a development tool through, for example, education and tourism. The International Astronomical Union understands this and is trying hard to address the development component in developing countries, working to achieve the UN’s Sustainable Development Goals.

The typical example in Africa is the case of South Africa where the installation of telescopes has not only popularised science and created jobs for young people, but also boosted the local economy and infrastructure. Burkina Faso could well draw inspiration from these success stories and position itself as a centre of excellence in West Africa.

A Political-Economic Analyst for Africa and outspoken opponent of the current policies of neo-colonialism. Also a highly respected researcher, writer, and speaker on a variety of topics concerning Africa.