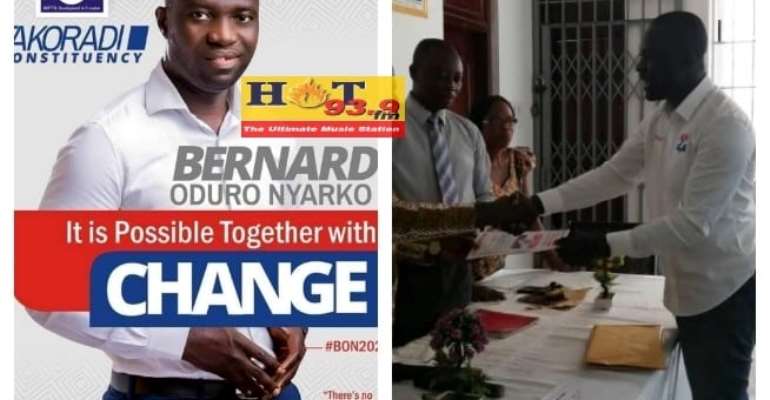 According to Bernard Oduro Nyarko, Hon. Kwabena Otchere Darko Mensah who is also the Western Regional Minister has failed to champion adequate developmental projects for the area as a result, the constituents are calling for a change.

"Hon. Kwabena Otchere Darko Mensah has really failed the constituency...he wasn't able to lobby for adequate developmental projects so he needs to pave way for me to come and save the constituency...the constituents are calling for change which makes me the right person to win the seat in the December 2020 elections for the Party".

Bernard Oduro Nyarko told the media and some of the delegates after submitting his nomination forms at the headquarters of the Takoradi constituency office of the New Patriotic Party.

He urged his supporters to continue to campaign vigorously for him.

He also advised them that "it should be based on issues and track records devoid of insults, personal attacks, and name-calling".

The New Patriotic Party (NPP) goes to the polls to elect Members of Parliament (MP) and Flagbearer of the Party for the December elections on April 25, 2020.

E/R: Tension In NPP As Philip Addison, Four Other Aspirants ...
7 hours ago