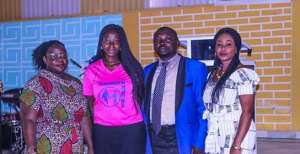 They seek to encourage expectant mothers and other stakeholders to put in place deliberate efforts at protecting the lives of both mother and child by leaving matters of labour ward to Doctors and midwives without external influence.

The maiden edition of the life-saving advocacy was held at the Shepherd Congregation Ministry on Sunday, 16th February at Nyamekye junction in Accra.

Speaking to the congregation, the founder of the group Nana Ama Asantewaa Kwarko said: the campaign is an action inspired by the group's research which proves some women choose myths, religious beliefs etc over Caesarean sections at the labour ward putting their lives and the lives of the babies at risk.

Also speaking to the congregation, Madam Adwoa Konadu Owusu- Adjei, a paediatric nurse specialist said breech, uterinerupture,cephalopelvic disproportion, preeclampsia and some other critical medical conditions can make a doctor recommend a cesarean delivery to save the lives of both mother and child.

Mrs Roselyn Asante, the advocacy director of the group pleaded with men not to abandon their wives at the hospital after caesarean sections.

Members of the church were elated and applauded the group for this wonderful initiative.