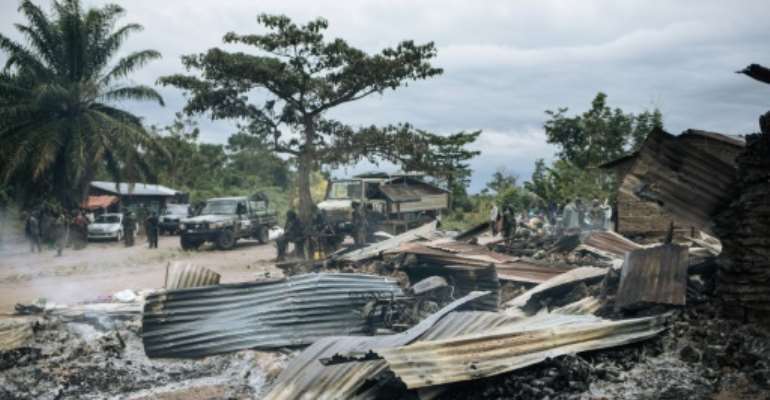 Burnt down houses are seen in the village of Manzalaho near Beni, Democratic Republic of Congo on February 18, 2020, following an attack allegedly perpetrated by the rebel group Allied Democratic Forces (ADF). By Alexis Huguet (AFP/File)

Five hostages taken by an armed group that killed 10 people in eastern DR Congo this week have been found dead, a local official said Wednesday.

Five bodies "were discovered in the neighbourhood of the Virunga National Park," John Kambale Sibendire, a local leader in Malambo district southeast of the city of Beni, told AFP.

"They are the bodies of inhabitants who were taken hostage in the attack," he said.

Ten people were killed late Monday when suspected members of the Allied Democratic Forces (ADF) attacked the village of Manzahalo.

It originally operated in Uganda but fell back to North Kivu, DR Congo's border province with Uganda, during the Congo Wars of the 1990s.

The militia appears to have halted raids inside Uganda and its recruits today are of various nationalities.

Already blamed for hundreds of civilian deaths in the Beni region since 2014, the group embarked on a series of massacres after the army launched a crackdown in October.

If the five dead are included in the toll, 398 people have died since then.