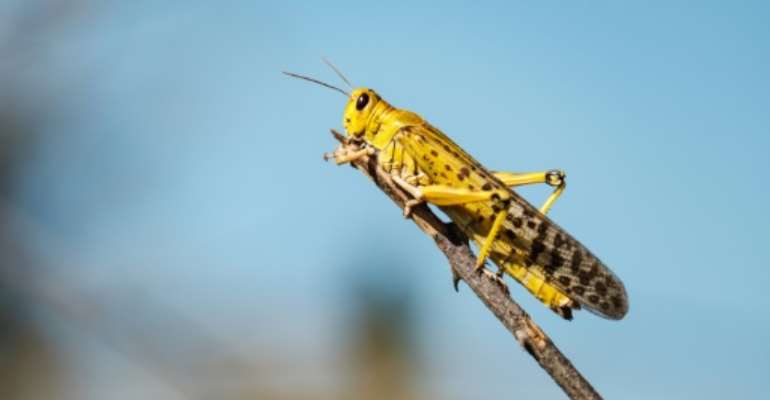 Under a warm morning sun scores of weary soldiers stare as millions of yellow locusts rise into the northern Ugandan sky, despite hours spent spraying vegetation with chemicals in an attempt to kill them.

From the tops of shea trees, fields of pea plants and tall grass savanna, the insects rise in a hypnotic murmuration, disappearing quickly to wreak devastation elsewhere.

The soldiers and agricultural officers will now have to hunt the elusive fast-moving swarms -- a sign of the challenge facing nine east African countries now battling huge swarms of hungry desert locusts.

They arrived in conflict-torn South Sudan this week, with concerns already high of a humanitarian crisis in a region where 12 million are going hungry, according to the UN's Food and Agriculture Organization (FAO).

"One swarm of 40 to 80 million can consume food" for over 35,000 people in a day, Priya Gujadhur, a senior FAO official in Uganda, told AFP. 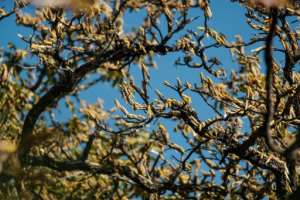 Large swarms of locusts can in a single day consume enough vegetation to feed 35,000 people. By SUMY SADURNI (AFP)

In Atira -- a remote village of grass-thatched huts in northern Uganda -- some 160 soldiers wearing protective plastic overalls, masks and goggles sprayed trees and plants with pesticide from before dawn in a bid to kill the resting insects.

But even after hours of work they were mostly able to reach only lower parts of the vegetation.

Major General Kavuma sits in the shade of a Neem Tree alongside civilian officials as locusts sprayed with pesticide earlier that morning fall around them, convulsing as they die.

An intense chemical smell hangs in the air.

Zakaria Sagal, a 73-year-old subsistence farmer was weeding his field in Lopei village some 120 kilometres (75 miles) away, preparing to plant maize and sorghum, when without warning a swarm of locusts descended around him. 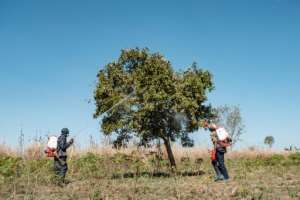 Soldiers have been deployed in Uganda to spray trees and savannas in a bid to beat back the infestation. By SUMY SADURNI (AFP)

"We have not yet planted our crops but if they return at harvest time they will destroy everything. We are not at all prepared."

East Africa's regional expert group, the Climate Prediction and Applications Centre (ICPAC), warned Tuesday that eggs laid across the migratory path will hatch in the next two months, and will continue breeding as the rainy season arrives in the region.

This will coincide with the main cropping season and could cause "significant crop losses... and could potentially worsen the food security situation", ICPAC said in a statement.

Since 2018 a long period of dry weather followed by a series of cyclones that dumped water on the region created "excessively ideal conditions" for locusts to breed, says Gujadhur.

Nevertheless, governments in East Africa have been caught off guard and are currently in "panic mode" Gujadhur said.

Desert locusts take over on a dizzying scale. 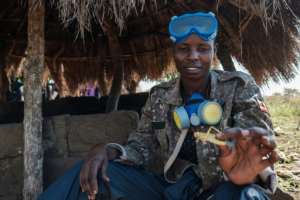 Locust eggs laid across the migratory path will hatch in the next two months, allowing the insects to continue to wreak havoc. By SUMY SADURNI (AFP)

One swarm in Kenya reached around 2,400 square kilometres (about 930 square miles) -- an area almost the size of Moscow -- meaning it could contain up to 200 billion locusts.

"A swarm that size can consume food for 85 million people per day," said Gujadhur.

Ugandan authorities are aware that subsequent waves of locusts may pose problems in the weeks to come, but in the meantime they are attempting to control the current generation.

Gujadhur is quick to praise the "quite strong and very quick" response from the Ugandan government but is concerned that while the army can provide valuable personnel, a military-led response may not be as effective as is necessary.

"It needs to be the scientists and (agriculture officials) who take the lead about where the control operations need to be and how and when and what time," she said.

'They eat anything green'

The soldiers have been working non-stop for two days, criss-crossing the plains on the few navigable roads, trying to keep up with the unpredictable swarms. 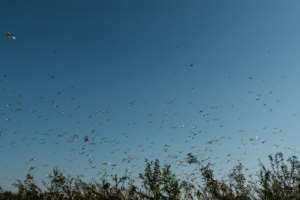 Major General Kavuma recognises that the biggest threat is from the eggs which are yet to hatch but is confident the army will be able to control this enemy.

"We have the chemicals to spray them, all we need is to map the places they have been landing and sleeping," he said.

"In two weeks time we will come back and by that time they will have hatched and that will be the time to destroy them by spraying."

Back in Lopei village, Elizabeth Namoe, 40, a shopkeeper in nearby Moroto had been visiting family when the swarm arrived.

"When the locusts settle they eat anything green, the animals will die because they have nothing to feed on, then even the people (will suffer)," she said.

"The children will be affected by hunger and famine since all life comes from all that is green. I fear so much."