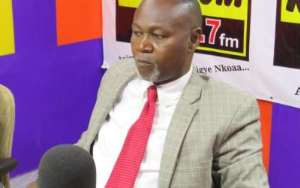 Former MP for the La Dadekotopon constituency, Nii-Amasah Namoale has accused President Akufo-Addo’s fight against illegal mining as a sham.

Namoale revealed that the national campaign against illegal mining popularly known as galamsey was a coy to enrich members of the ruling party.

He said: “This galamsey scandal is the result of a grand scheme set up by President Akufo-Addo himself to enrich NPP officials to finance the New Patriotic Party.

“It was quite shocking, the video was damning. the task force was set up to provide cover for some persons to continue engaging in illegal mining.

He continued, "Akufo-Addo’s so-called fight against galamsy is ruse calculated to expropriate the illicit galamsy trade for NPP government officials. It is now clear that there was no fight, it was a sham, it was all a ploy to enrich themselves."

The claim follows the hundreds of missing excavators that were seized from some illegal small-scale miners as revealed by Professor Kwabena Frimpong Boateng, Minister of Environment, Science, Technology and Innovation.