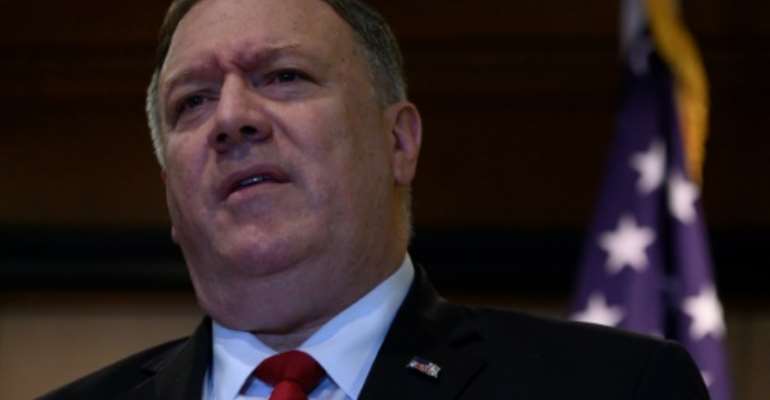 Pompeo made a pitch for the United States as Africa's investment partner in a three-nation tour of the continent. By ANDREW CABALLERO-REYNOLDS (POOL/AFP)

US Secretary of State Mike Pompeo on Wednesday closed a three-nation Africa tour with a thinly-veiled swipe at China as he talked up Washington's ability to stimulate growth and entrepreneurship on the continent.

"Countries should be wary of authoritarian regimes with empty promises. They breed corruption, dependency," Pompeo said in a speech to diplomats and business leaders at the UN's Economic Commission for Africa in the Ethiopian capital, Addis Ababa.

"They run the risk that the prosperity and sovereignty and progress that Africa so needs and desperately wants won't happen."

Pompeo in his remarks did not explicitly mention China -- Africa's largest trading partner -- but analysts predicted ahead of his trip that he would attempt to pitch the US as an alternative source of investment.

On Wednesday Pompeo name-checked US companies operating in all three countries on his Africa tour, the first by a US cabinet-level official in 19 months: Bechtel in Senegal, Chevron in Angola and Coca-Cola in Ethiopia.

He also hailed the free market generally, blasting "failed socialist experiments of years past" in places like Zimbabwe and Tanzania.

And he criticised a proposed constitutional amendment in South Africa that would allow private property to be expropriated without compensation -- a plan that seeks to overcome inequalities set down in the apartheid era.

The amendment would be "disastrous for that economy and most importantly for the South African people," he said.

Pompeo's attempt to lay out a positive vision for US cooperation with Africa has been undermined by President Donald Trump's Africa policy so far, analysts say.

Critics are quick to cite Trump's widely-reported remarks in 2018 when he used a profanity to describe African and poorer Western Hemisphere nations whose citizens migrate to the United States.

Washington is currently discussing military cuts in Africa, and the US recently announced tightened visa rules targeting Africa's most populous country, Nigeria, as well as Tanzania, Sudan and Eritrea.

"Pompeo is unlikely to undo the damage from the Trump administration's travel bans, the proposed budget cuts, or the president's disparaging comments about the region," said Judd Devermont, Africa director at the Center for Strategic and International Studies, a think-tank in Washington.

But African leaders would nonetheless "welcome his long-overdue engagement and focus on the positives as much as possible," Devermont said.

"It is undeniable that Chinese investment was quite crucial in keeping Ethiopia on track as one of the world's fastest-growing economies for many years," Abel said.

He added that much Chinese money has gone toward tangible projects like roads and buildings, while American money is more often funnelled to "less visible" fields like education and health.

"The fact that Chinese loans and sometimes grants have less bureaucracy also makes it quite convenient for Ethiopia and Africa at large," Abel said.

China has funnelled cash and loans into infrastructure projects across the continent.

However Beijing has faced accusations, which it denies, of saddling poor nations with debt, siphoning off mineral resources and leaving environmental damage.

Pompeo insisted Wednesday that Trump was eager to play a bigger role on the continent.

"He wants more to happen between the United States and nations all across Africa."