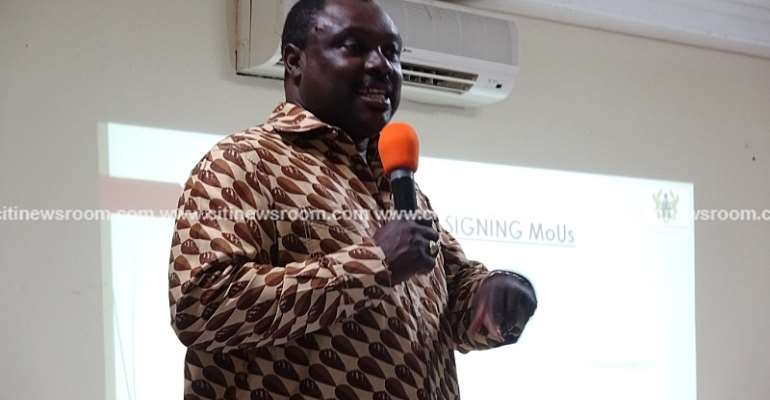 Mr. Robert Ahomka-Lindsay, a Deputy Ministry of Trade and Industry, has filed his nomination forms to contest in the New Patriotic Party’s (NPP) parliamentary primaries in the Kumawu Constituency of the Ashanti Region.

The Deputy Minister who is a first timer in the parliamentary race is the first to submit his forms, out of the four contestants who picked forms for that position in the area.

Presenting his nomination forms at a brief ceremony at the Party's Constituency office at Kumawu in the Sekyere Kumawu District, he pledged to implement pro-poor interventions and bring progress to the area, when given the nod.

Mr Ahomka-Lindsay, a native of Aninagya, a farming community in that District, said leadership based on improving on the economic fortunes of the people through the establishment of industries, was a powerful tool to create gainful employment for the people and thus lift them out of poverty.

“If you give somebody a job, the person has the liberty and the ability to pursue his or her lifetime dreams without hindrance,” he explained.

Mr. Ahomka-Lindsay called on the constituents to unite and rally behind him for a massive win, adding that, it was through unity that progress could be made.

The governing NPP has scheduled April 25, 2020, as the date to hold parliamentary primaries in all 169 constituencies where the Party has sitting MPs.

The polls would be held to elect the parliamentary candidates the ruling NPP would field for the upcoming 2020 general elections.

Mr. Joseph Danso, the Kumawu Constituency Chairman, having gone through the documents presented by the deputy Minister, urged the constituents to continue to uphold peace and unity with the aim of re-electing President Akufo-Addo, for a second term.

Mr. Ahomka-Lindsay used the occasion to donate a television set and a modern office shelf to the Kumawu Constituency Office.