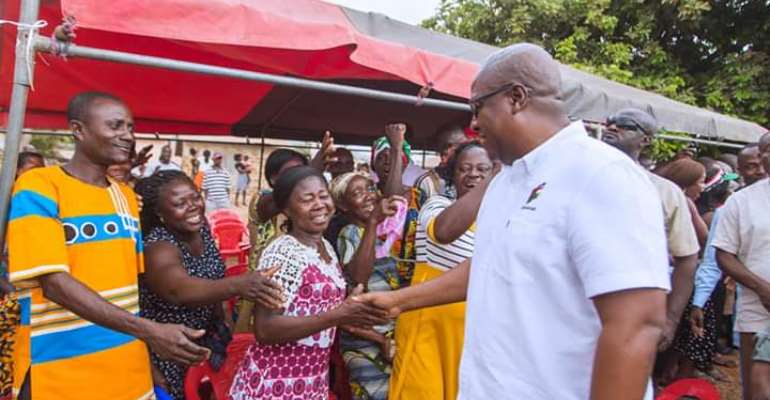 The Omanhene of Awaso Asempaneye, Nana Oko Twansuo III, has commended former President John Dramani Mahama and the National Democratic Congress (NDC) for the massive development projects across the country under his regime.

He specifically mentioned the provision of a CHPS Compound for his community and the start of work on the Awaso town roads in the town.

Nana Twansuo said his people are working and praying for a John Mahama victory in 2020 because the people of Asempaneye see him as a redeemer, urging all Ghanaians to vote for John Mahama.

The Omanhene was speaking during a courtesy call by the NDC Flagbearer as part of his #SpeakOut tour of the Western North Region. The #SpeakOut is an opportunity for the NDC leader to meet, interact and listen directly to the people of Ghana.

According to Nana Twansuo, the people of Awaso Asempaneye are looking forward to the NDC expanding the CHPS compound into a hospital and complete the Awaso town roads. The contract for the road works was stopped by the NPP government on assumption of office in 2017.

“Even if our thumbs are chopped off on December 07, my people and I will use our toes to vote for you to come and continue with your good works”, the chief announced.

President Mahama thanked the chief and his people for the acknowledgement of the contributions of the NDC, adding that he is aware of the challenges facing cocoa farmers in the region and will take measures to tackle them.

The NDC Flagbearer said the decision to sell fertiliser to cocoa farmers among others is insensitive and affecting the output of cocoa production.

The #SpeakOut tour will take place in all 16 regions of the country. Mr. Mahama said major development projects especially roads in the Western North Region were executed by the NDC from the era of President Rawlings through President Mills.

He added that at the time of exiting office in 2016, many contracts were awarded for upgrading of roads, stressing that, those contracts were either abrogated by the NPP government.

He promised to revisit all those projects and new ones when voted back to power.