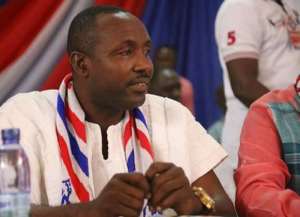 The General Secretary of the governing New Patriotic Party (NPP), John Boadu has urged parliamentary aspirants who are struggling to pick nomination forms at the constituency level to do so at the national office.

Barely two days to the closure of nominations for the NPP’s parliamentary primaries, some aspirants are still facing challenges in getting access to the forms.

The party will organise its parliamentary and presidential primaries on April 25, 2020.

It opened nominations on January 20, 2020 and will close the process on Thursday, February 20.

However, some of the aspirants have complained that efforts to pick up nomination forms at the constituency and regional levels have been futile.

Mr. Boadu on the Citi Breakfast Show acknowledged that there had been a few hitches with the picking of nomination forms in a few regions but was quick to add that the affected aspirants could resort to the national headquarters to pick their forms.

“Generally out of the 169 constituencies that we have opened, you remember that [in the] Ayawaso West Wuogon because we held a by-election just recently, two years before the general election, the convention is that the candidate that wins on our ticket is repeated without going through the primaries so that has been set out. I can on top of my head mention Weija Gbawe in Accra, Ablekuma West [as some areas aspirants are having challenges]–There are about three constituencies in Ashanti Region that have a few challenges.”

Mr. Boadu said the national headquarters will be opened from 7 am to 6 pm to afford persons who had not picked up forms yet the opportunity to do so.

“We have just about three days to go. Henceforth our national office will be opened from 7am to 6pm. The forms will be available. Anybody that comes and shows evidence of having been denied will be given forms to contest.” Weija Gbawe

In the Weija Gbawe constituency, two of the aspirants have blamed the incumbent Member of Parliament who doubles as the Deputy Minister of Health, Tina Mensah of scheming to prevent them from having access to the nomination forms.

Some of the aspirants who spoke to Citi News shared their pain and disappointment.

One of the aspirants said “They should call that woman to order, the grounds are not good. They should give us the forms to fill and go to vetting and compete on a healthy ground and then we can unite and give the party what the party deserves”.

Another aspirant said “I will unseat her and she knows. Someone is taking the constituency as his or her father's property or business which has been given to her and it is not something we feel as democratic as it should be”.