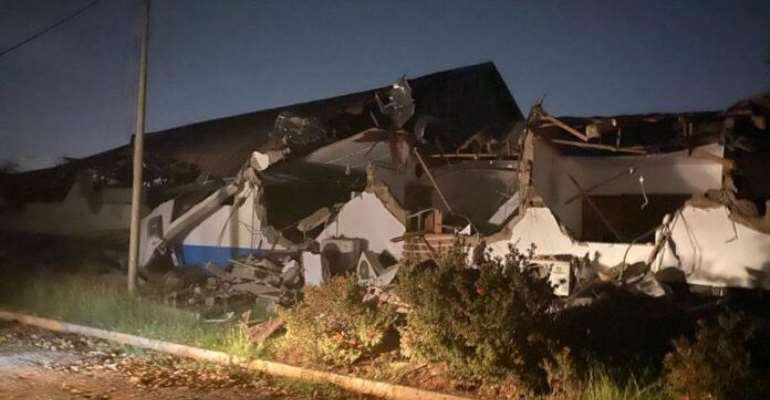 Raymond Archer, the Chief Executive Officer of the Universal Label and Packaging Company, one of the numerous shops that were demolished by the Trade Fair Company Limited, has bemoaned the destruction.

A number of structures belonging to different companies were pulled down on Monday dawn on the authorization of the Trade Fair Company Limited following a redevelopment project it intends to undertake.

But the victims have since been complaining about jobs losses and destruction of properties, criticizing the Trade Fair Company for not serving them an early notice to evacuate their belongings from their shops.

One of such is Mr. Archer, who has operated his business at the Trade Fair Centre for a decade now.

Addressing his concerns on Eyewitness News on Monday, he recalled the huge amount of money invested in his business at the Trade Fair Centre, saying it was never fair how they were being treated now.

“If the land belongs to them [Trade Fair Company], then why didn't they keep it? Why did they rent it? Because Trade Fair always needs money. When there was no light at Trade Fair, I brought a transformer to bring light there. That was their responsibility. They didn't even have the money to do it. We brought light to the Trade Fair to bring life back. So if you say that Trade Fair owns the land, the fact that you own the land doesn't mean you can leave it and sack the tenants after they have invested millions of dollars. We have invested almost US$10 million there. You want to throw us out like we are squatters so that you will bring another business,” he exclaimed. Victims lament demolition exercise

Owners of buildings demolished at the Trade Fair Centre in Accra had earlier criticised authorities for the exercise, accusing them of failing to give them ample notice.

The demolition comes after an injunction that was placed on the exercise was lifted by an Accra High Court on Wednesday, February 12, 2020.

The affected tenants had secured a court order to prevent the Trade Fair Company from continuing with the exercise which started in May last year.

Shipping Officer for West Africa Construction and Commodities Limited, which is one of the affected companies, Barbara Vanderpuye said the demolition came as a surprise to them as they had begun processes to appeal the court ruling.

Meanwhile, the Ghana Trade Fair Company has denied allegations made against them by the victims which accused the company of not giving ample notice prior to the demolition exercise.

In a statement, the company insisted that it “took all necessary steps” to inform the businesses of a redevelopment project it intends to undertake.

The company also said, “no business or businesses have ever been targeted for demolition because of their political or other affiliations.”