Media And Advocacy Against Witch Persecution In Africa 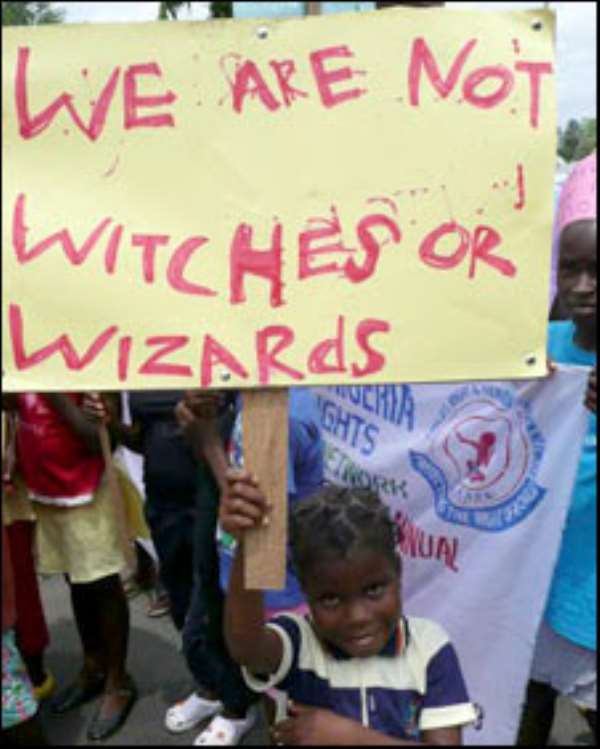 The Advocacy for Alleged Witches has launched an initiative to end witch-hunting and witch persecution in Nigeria and in Africa in the year 2030. Media establishments are critical to the realization of this objective. Waging an effective campaign against witchcraft accusation, witch persecution and killing has become necessary because for too long witchcraft accusation has been a form of death sentence in our communities.

The notion that people could harm others through occult or spiritual means exists and persists among the local population including the young and the old, educated non-educated, those in rural and urban areas. Some of the ways suspected witches are believed to perpetrate occult harm include turning themselves into goats, cats or birds or displaying some strange behavior, winking or cursing or threatening the supposed victim. Not surprisingly, some years ago, the police in Kwara state arrested a goat after members of a vigilante group brought the goat to the station believing it was a car thief who turned into a goat in order to evade arrest. Claims of people turning to cats or birds are often reported in the media.

Those who are believed to engage in witchcraft are treated without mercy; they are lynched, tortured to confess and admit to witchcraft. They are ostracized and abandoned. Alleged witches are subjected to horrific abuses including violent exorcism and trial by ordeal. These atrocities are still taking place in our society today. Last year, relatives beat severely a young man in my community in South eastern Nigeria after accusing him of killing the mother though occult means

Witch persecutions happen at scales, which many cannot imagine. The consequences are severe, and health damaging. In fact survivors live with the trauma for the rest of their lives. Recently, a university student from Bayelsa recounted to me how, as a child, the father and his siblings severally accused him of witchcraft and abused him. They used pepper, cocoyam leaves and razor blades to torture and compel him to confess to killing the mother, and destroying the sister’s marriage and perpetrating other misfortunes. They later took him to pastors and prophets where he was chain and forced to undergo dry fasting.

In December, a woman burnt a 10-year-old girl following accusations of witchcraft in Lagos. And in Plateau, a parent set two children ablaze based on suspicions of witchcraft. A pastor flogged the son to death over witchcraft allegation in Delta state. These cases are actually the tip of the iceberg of abuses linked witchcraft belief that take place in Nigeria. Most cases of witch persecution target vulnerable members of the population-children the elderly, women and people living with disabilities. They happen within the family, in rural areas and are largely unreported.

Unfortunately, dispositions to violence and persecution related to witchcraft beliefs have largely been reactive. Any time there is a reported a case of witch persecution or killing, the police would launch an investigation, some human rights groups may issue statements, and some media houses some editorials if any at all. And after a while, nothing is heard about the incident and it becomes business as usual until another incident of witch persecution. There has not been a proactive initiative to tackle abuses that are linked to witchcraft beliefs and accusations and wean our society from witchcraft fears and anxieties.

Thus in January, the Advocacy for Alleged Witches was launched and its goals have been articulated in the decade of activism declaration. The main objective of AfAW is to achieve a critical mass of advocates for alleged witches and help bring an end to witch persecution in the region in the next ten years.

Abuses linked to witchcraft accusations are not only taking place in Nigeria but are also happening in other African countries. Alleged witches are lynched in Kenya, stoned to death in Malawi and banished to make shift shelters, or the so called witch camps in Ghana and Burkina Faso. In fact in Burkina Faso, they call, alleged witches, Soul eaters (Mangeuses d’Ame) to stress the vicious nature of their operations.

AfAW is working to protect, defend, and rehabilitate alleged witches, male or female, young or old, children or elderly persons. We have rolled out a campus, Who is afraid of witches on campuses? This program aims at dispelling witchcraft fears and anxieties and mobilizing a critical mass of student advocates for alleged witches. We have held an event at the university of Ibadan this month and there are plans to organize more events in our tertiary institutions. We will directly intervene to ensure that alleged witches are safe and that no harm comes to them wherever we can. AfAW will also campaign to educate and enlighten witchcraft accusers and believers. At AfAW, we are of the view that witchcraft accusers are mistaken in their understanding and interpretation of misfortune. To realize a witch-hunting free Africa, accusers must be reasoned out of their mistaken notions and the accused must be shielded from harm. To this end, AfAW needs a balanced reporting from the media and the journalists. Incidentally, the media have been instrumental to reinforcing and valorizing witchcraft notions and ideas. Many media agencies present reports on witchcraft in ways that confuse facts with fantasies, reality with illusions and hallucinations, truth and falsehood, subjective, inter-subjective and objective experiences. Many newspapers publish headlines such as ‘A Witch crashlands in a church compound’. ‘An old woman turns to a bird in Lagos’ etc. These reports do not usually contain critical comments and viewpoints on these superstitious claims. This culture of media reporting must change. Critical perspectives must be integrated in reporting news on witchcraft. In fact media agencies must partner with AfAW in dispelling witchcraft fears and anxieties and in ending witch persecution in Africa in 2030.