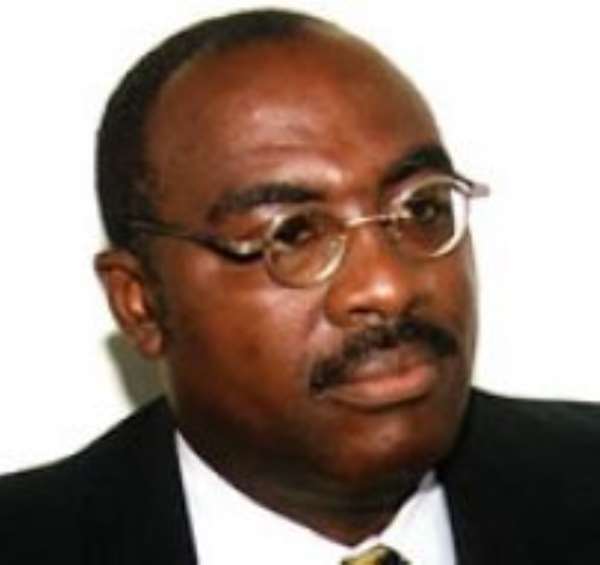 The Minister of the Interior, Papa Owusu-Ankomah, has described the Dansoman shooting incident which claimed four lives, including two women, last Friday as regrettable.

“The Police Administration regrets the action which led to the death of the two women,” he said, adding, “The police were doing their job when this unfortunate incident happened.”

Papa Owusu-Ankomah said this when he led a high-powered delegation to console the families of the two women who died in the shooting incident and gave the assurance that “we will ensure speedy investigations into the matter and make the findings known to the public”.

Lydia Opoku, alias Awo, and Ataa Boatemaa, both traders, were shot dead in cold blood last Friday by armed policemen who mistook them for armed robbers.

Papa Owusu-Ankomah called on all those who had information as to what transpired that Friday to come forward with it.
He stated that the Police Administration would ensure that justice prevailed after the investigations into the shooting incident.

“Nobody will be shielded after the investigations,” he said, but could not say whether or not the policemen involved in the incident had been apprehended.

Papa Owusu-Ankomah said President John Agyekum Kufuor had been alarmed by the increasing crime wave in the country and had directed the police to ensure that they apprehended the culprits to enable the citizenry to go about their duties in peace.

He said it was very unfortunate that in the course of apprehending some armed robbers, that incident happened.
“It is unfortunate that this sad event happened and we express the condolences of the President and his government, the police and the entire nation to you the bereaved family,” he added.

Papa Owusu-Ankomah said the police were resolved to fight crime and protect innocent people from being robbed of their property and asked the general public to co-operate with them in the discharge of that task.

He expressed regret that the public had to lambast the police for what had happened, forgetting the good work that the police had done.

“We understand the circumstance and we can only call for patience on the part of the families and plead with them to co-operate with us in the investigations to unravel the whole truth,” he noted.

Mr Acheampong, on his part, also expressed the condolences of the Police Administration for the loss of the two women.
He said investigations were under way and gave the assurance that the outcome would be made public.

Mrs Grace Opoku, Awo's mother, again recounted the bitter tale of the policemen guarding the Tico taxi in which the women were refusing to allow her to save her daughter.

“I saw her in pain but she was not dead, but I was completely denied access to her,” she said in tears.
Mrs Opoku thanked the government for sending a delegation to console her and the family and expressed the hope that nobody would be shielded for his involvement in the shooting incident.

On her part, Maame Ama Dapaah, Ataa's mother, also expressed regret at the initial police reports that created the impression that her daughter was an armed robber.

“We are God-fearing people and will not engage in acts of robbery or any form of crime,” she said.
Speaking with a heavy voice, Maame Dapaah said before the incident, her daughter had been preparing to get married.

She, therefore, called for a thorough investigation to be conducted into the incident. Nana Kwabena Poku, the Apradehene of Kumasi Abrepo, who is one of the elders of the family, expressed the gratitude of the family to the government and the Police Administration for taking time off to console the family.

He was of the view that the same seriousness would be attached to the investigations and the outcome made public.

In a related development, the Commonwealth Human Rights Initiative (CHRI) has called for the immediate drawing up of guidelines on the use of force by the Ghana Police Service.

That, it said, would conform to international standards and the protection of human rights in the exercise of police powers.

A release, signed by Mr Edmund Amarkwei Foley, the Project Coordinator of CHRI, and released in Accra consequently called for a full scale, independent and impartial investigation into the circumstances that led to the death of the victims of last Friday's shooting incident and the sanctioning of the offending police officers.

It extended its heartfelt condolences to the families of the victims and called on the police to make known to the public the results of their investigations.

It also called on the state to compensate the bereaved families adequately for their loss. The commission, which described the shooting incident as unfortunate, said it was yet another “regrettable incident of operational misjudgement by the police, leading to the death of innocent civilians”.

According to CHRI, that unfortunate incident had again brought to the fore the need for the police to be more circumspect in exercising their professional judgement when pursuing suspects of crime.

It emphasised the centrality of the police, given their enormous powers to pursue and arrest crime suspects, but said the respect for basic human rights in the exercise of their duties was essential.