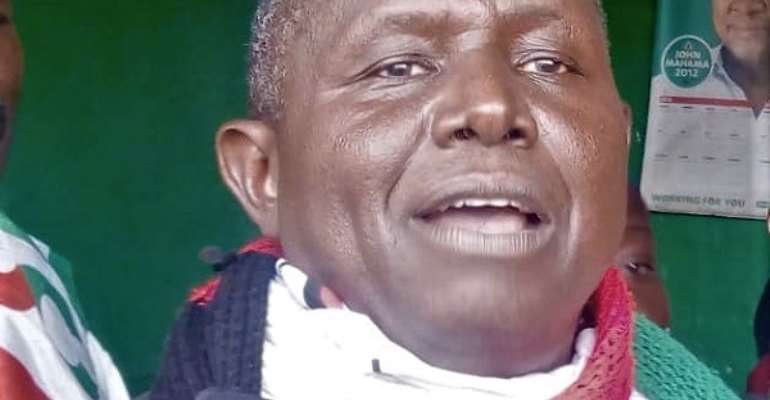 He says the NDC would win by 80 per cent to send the New Patriotic Party (NPP) back to opposition.

He said the electorate would vote massively for former President John Dramani Mahama as president in this year’s polls for him to continue his good works as the government had failed to deliver on its promises made to the electorate.

Mr Asante, who is also a cadre, made this known to the media when he submitted his nomination forms to contest the New Juaben North parliamentary primaries of the NDC at the constituency office in Effiduase- Koforidua in the Eastern Region last Friday.

The event, which was attended by some constituency executive members and party supporters, including some branch executives, was to support Mr Asante to enable him to snatch the seat from the NPP in this year’s general election.

Confident of winning
Mr Asante stated that the NDC would give the NPP a good run in the 2020 polls and that the party was confident of wresting political power from the NPP.

“The NDC is poised to work very hard with all party members as well as supporters to realise its winning dream. As a cadre, I understand the concept of grassroots mobilisation and will not make any mistake to get a solid team in place to campaign for victory in the primary and the 2020 elections as a whole. Constituency party executives will not be left out in our quest to snatch the seat from the NPP,” the former MCE said.

Mr Asante said the campaign team would be explaining to the delegates and the electorate about the policies and programmes of the party.

Issue based
"I will not insult my other contenders for the sake of votes," Mr Asante stated.

He indicated that he would win the primary which had Mr Oti Boateng and Dr Abdul Manan Mustapha contesting.

Politics of insults
The New Juaben North Constituency Chairman of the NDC, Alhaji Nasiru Abdul-Rahaman, admonished parliamentary aspirants in the constituency to desist from insulting each other as they went about campaigning for votes ahead of the 2020 polls.

He also urged them to respect the party’s constitution and do decent campaigns to propagate their messages well to the party delegates.

According to Alhaji Abdul-Rahaman, the branches at the constituency level would be adequately resourced to ensure that the party’s victory at this year’s polls was achieved.