We Will Stop EC From Compiling New Voter's Register---Anita Threatens 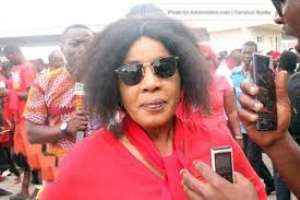 A former First National Vice-chairperson of the National Democratic Congress (NDC), Madam Anita DeSoso has vowed to resist any attempt by the Electoral Commission (EC) to introduce a new voters’ register for the 2020 general elections.

She insisted that any attempt by the EC, headed by Jean Mensa, to compile a new voter’s register on the back of Ghana Card would be resisted.

“The current voters register was used to successfully elect about 6,600 district assembly members and about 33,000 unit committee members, yet the EC was telling Ghanaians that that same register could not be used to elect one President and 275 members of Parliament and, therefore, a new voters’ register must be compiled,” Anita DeSoso exclusively told Kwame Tutu on ‘Anopa Nkomo‘ on Accra-based Kingdom FM 107.7

“In our view, any attempt to create a new register will be a recipe for disaster since it has the potential to generate misunderstanding amongst the people. She said a new register “could plunge the nation into political turmoil,” she added

Meanwhile, Anita DeSoso has condemned the Jean Mensa-led Electoral Commission for what it termed ‘shambolic’ decision to compile a new register.

She noted that the current register had been used for a number of elections, including the just-ended local-level elections.

The Electoral Commission says its decision to compile a new voters’ register for the 2020 elections was because its current biometric machines are outdated.

According to the commission, the need for the new voters’ register was necessitated by several factors which included the need to replace the outmoded biometric machines.