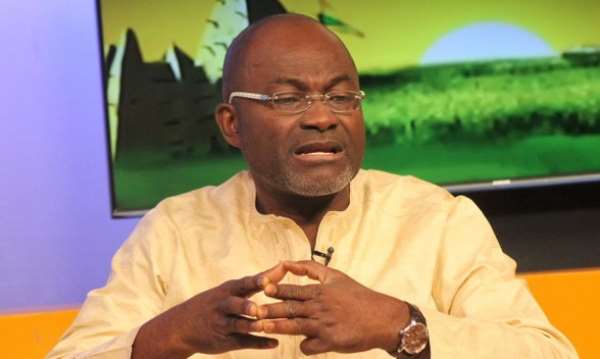 In general, working in government, as a Member of Parliament is not an easy job, your role in the society, relationship with the several people in the community, dealing with government matters and contributing to debates on national issues, I can say are probably some of the difficult tasks in politics.

Since, your work in the political field is to serve people, Ken Agyapong, you should know that many may like you but thousands are those that are going to be your enemies. Over the past years, there are a number of criminal cases against Ghanaian politicians, including you.

However, since in the court of law, an accused shall be presumed innocent until proved guilty of an offense in the manner prescribed by the law, nobody can accuse of you of any crime, even though from the time I was born, I have never had confidence in Ghana’s judiciary system.

I have watched a number of videos on 'Youtube,' explaining sensitive points in cases you have been implicated while trying to defend yourself, unfortunately, the manner you go about it trying to establish your innocence is totally unprofessional.

You see, Hon Ken Agyapong, I know that the most painful thing any human being could face is to accuse the person of something he hasn't done, however, you can be innocent but the dilettante way one may handle a case can make him either an amateur in solving problems or guilty.

Your utterances are sometimes disappointing, vile, insulting, full of venom and shocking that such words came from the mouth of a Member of Parliament. Sometimes when angry we do or say bad things we often don't think about them. You may know later if someone tells you.

Like other people, I see your honesty in some of those complicating issues but the way you go about it, Agyapong is completely wrong. You feel perpetually angry and have the impression that those around you never agree with you, and therefore, you have to fight to assert your point of view.

As a Member of Parliament, you are intelligent enough to know the power of the tongue. The biblical book of James Chapter 3, from verse 5-6, reads: “The tongue is also a small part of the body, but it can speak big things."

"See how a very small fire can set many trees on fire. The tongue is a fire. It is full of wrong. It poisons the whole body. The tongue sets our whole lives on fire with a fire that comes from hell."

For example, it is likely that you have nothing to do with the assassinated journalist, Ahmed Hussein-Suale but because of your unprofessional conduct on social media, inciting violence against the journalist and also seen in a video clip exposing the victim’s photo with a threat that you will pay for him to be beaten up, you instantly became a suspect when he was brutally murdered.

You are a free man in Ghana today but this case would have placed you in a very tight corner unable to free yourself if it had happened in a developed country. Anger can’t only put you in trouble; it can also be toxic for your health and aggravates a risk of cardiac attack.

Shame and reproach for anger seem natural, but it does not change the situation, therefore, if you are really serious, to work on your anger issues, you can actually be one of the best Ghanaian politicians, especially, in regard to your philanthropic activities.

Always remember that due to your position, you will be provoked or accidentally be on the path of hostility, please, be calm and restrain yourself from any public or social media embarrassment.

Ejura probe: Ministerial Committee presents its report to In...
11 minutes ago