Rawlings and Kufuor Are Both Hypocrites – Part 3 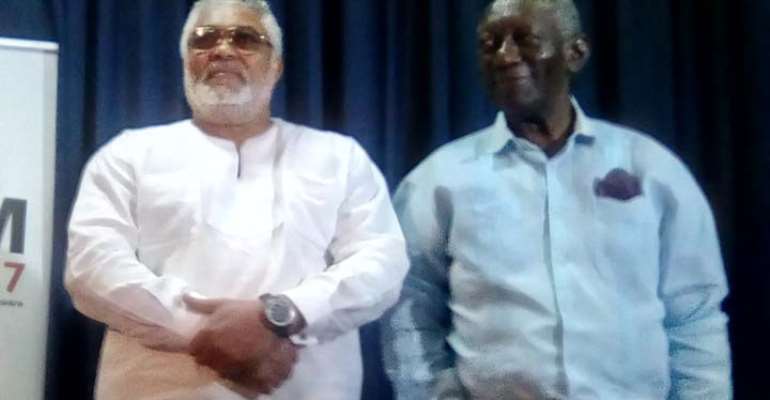 I lost any respect that I may have had for Chairman Jerry John Rawlings in the early 1990s, when I read an interview in which the leader of the then newly formed National Democratic Congress (NDC) told the reporter of a Nigerian magazine that he was much too busy with running Ghana to have any time to think about any political idols or heroes on the continental African scene. So I am a bit flabbergasted to learn that Mr. Rawlings had actually recently invoked the name of President Kwame Nkrumah in connection with something good or progressive that the latter personality had done or achieved for the benefit and/or development of Ghana (See “A ‘Hypocrite’ Like You Must Shut Up About Integrity – Kufuor to Rawlings” MyNewsGh.com / Ghanaweb.com 11/1/19).

I also vividly recall that at the inauguration of the Kwame Nkrumah Mausoleum in Accra, in the early 1990s, in the presence of such Diasporic luminaries as Dr. Betty Shabazz, window of the legendary African-American Muslim nationalist leader Malcolm X, then-President Rawlings spent most of the time allotted to him on the program lambasting the first postcolonial Ghanaian leader for being an extortionate and profligate politician who frittered the opportunity to significantly advance the cause of human rights and democratic freedom and justice in the country. Back then, the man sounded so embarrassingly incoherent and insufferably insolent that I was left wondering whether he was deeply hooked on some psychotropic drugs.

You see, had any of his associates and hangers-on bothered to advise the faux-socialist-oriented junta chairman turned democratically elected president to look into the rhetorical mirror or looking-glass, as it were, Mr. Rawlings would have certainly realized to his horror that, in reality, what he had to say, especially those things that were decidedly unflattering about the immortalized leader of the Convention People’s Party (CPP), applied to the speaker himself far more than it could be aptly deemed to be applicable to the rhetorical subject of Chairman Rawlings’ address. Mr. Rawlings’ rather morally and politically benighted decision to summarily expropriate a house allocated to the Nkrumah Family, especially Mrs. Fathia Ritz Nkrumah and her three children, by Chairman Ignatius Kutu Acheampong, was the most egregious act of savagery in postcolonial Ghanaian political history.

Even more significantly, the expropriation of the Nkrumah bungalow, which Mr. Rawlings is alleged to have reallocated to Justice DF Annan, late, his fellow Trokosi Nationalist Trucker or Teamster, strikingly underscored the fact that the so-called Rawlings Revolution had anything to do with everything but any dispassionate act of national unity. You see, the tragic irony of the factual reality here is that by the close of his faux-revolution, Chairman Rawlings and his associates and henchmen would have privatized and commandeered for themselves a remarkable number of state-owned and taxpayer-underwritten real-estate properties. So the most pertinent question worth asking here is this: Were Mr. Rawlings and his Provisional National Defense Council associates and minions more worthy of the appropriation of expropriated state-owned real-estate properties than the Nkrumah Family?

That was not quite the way or manner in which I had wanted to cast this matter or issue. But I guess this would suffice for the nonce. I also have absolutely no doubt in my mind that Chairman Rawlings does not mean a single word of his own statement of love for President Nkrumah. You see, this political upstart began his patently pedestrian journey hoping that, somehow, Ghanaians and the rest of the citizens and inhabitants of the African continent would grow to prize the half-Scottish and half-Ewe waif over and above the equally politically ambitious man who spearheaded the continental African Independence Movement for most of the 1950s and the 1960s. Any keen observer of African politics could have easily predicted some four decades ago that his was a veritable pipedream.

There is a common saying that if you cannot beat them, you might just as well join and then hope that you would be able to carve up at least a fairly respectable niche among them. And that is exactly what Chairman Rawlings, fast receding into the proverbial sunset in recent years attempted to do. He would not exit without leaving behind his bite marks. And if he cannot leave any bite marks, then, at least, Ghanaians can rest assured that the Sogakope Mafia Capo is apt to leave his spitballs in the gallery of our National Hall of Fame. At least his sticky saliva-soaked spitballs look certain to be as good and visually recognizable as his bite marks, perhaps even more so.