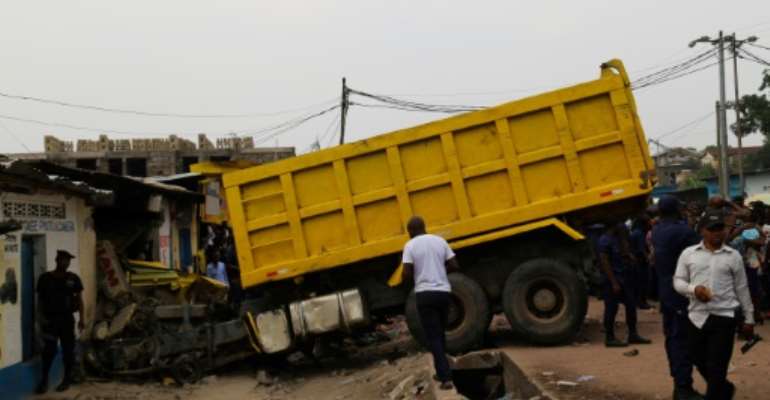 The lorry careered into several other vehicles and also hit several pedestrians. By Junior KANNAH (AFP)

At least 14 people died and some two dozen more were hurt Sunday when a lorry ploughed into vehicles and pedestrians in the Democratic Republic of Congo capital Kinshasa, police said.

Citing witness accounts, Kinshasa public security chief Miguel Bagaya told AFP the lorry smashed into a taxi bus and other vehicles as well as pedestrians after its brakes failed.

"To date, there are 14 dead and several injured. There could be more than 30 injured," Health Minister Eteni Longodo said after visiting the scene.

"The government is here. We are taking care of the people. We shall ensure that everybody benefits from quality treatment," Longodo added.

Congolese often accuse the authorities of responding inadequately to such incidents.

Interior Minister Gilbert Kokande, who joined Longodo at the scene, said the government would seek to take "preventive measures" to crack down on speeding along a busy sloping stretch of road near the university.

Witness Joseph Enenge told UN-run Okapi radio he estimated the death toll at around 30 while another witness, Yasmine Lutonadio, told AFP that "there were so many dead, I just can't take it in."

Enenge and Lutonadio said the lorry had hit around eight vehicles.

AFPTV saw half a dozen shattered vehicles at the scene, including two minibuses and three cars.

Top Congo FM radio tweeted that the lorry was carrying a cargo of stones and hit "several vehicles and motorbikes", without giving further details.