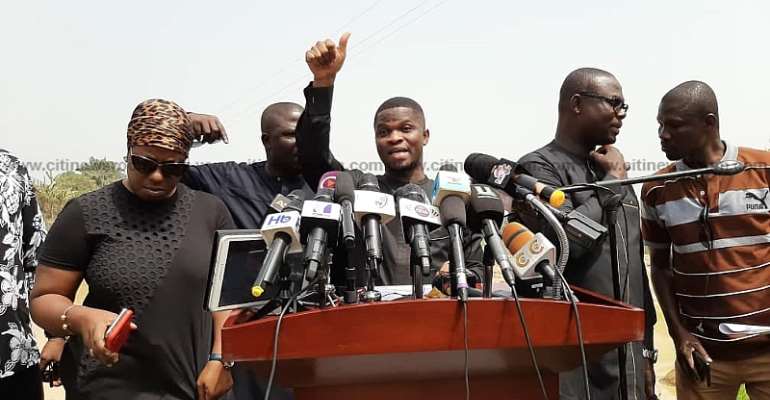 The National Democratic Congress says it will in the coming day petition the UN General-Secretary, António Guterres, to remove President Akufo-Addo from his position as co-chair of the United Nations Eminent Group of Sustainable Development Goals Advocates.

The NDC argues that President Akufo-Addo has failed the country in his promise to protect the environment and fight illegal mining in Ghana hence its decision to push for his removal from the UN SDGs role.

Addressing the press at the banks of River Pra in the Central Region on Sunday, Communications Officer of the NDC, Sammy Gyamfi said petitioning the UN will help send a strong signal to the government that, Ghanaians are not happy with its handling of the galamsey issues.

“We hereby serve notice, that the NDC shall in the coming days, petition the UN Secretary-General, Antonio Guterres, to revoke the appointment of President Akufo-Addo as Co-Chair of the SDG Advocates. Clearly, President Akufo-Addo has failed to show genuine commitment to the fight against illegal mining and the protection of the environment in his own backyard.”

“His corrupt government has become an active enabler and promoter of the ‘galamsey’ menace and the destruction of the environment in a way that affronts the SDGs of the United Nations. He has proven to be unfit for the prestigious position of Co-Chair of the UN SDGs Advocates, for which reason he must be removed without delay. And, we are absolutely convinced beyond doubt, that the United Nations will act in the interest of the Ghanaian people, the international community and the environment,” he added.

Where are the missing excavators

The NDC is also demanding from President Akufo-Addo the public exhibition of all confiscated excavators, gold, ammunitions and all other mining equipment seized during the fight against illegal mining.

The party is alleging that all items as listed at paragraph 801 of the 2020 Budget Statement presented to Parliament include 900 excavators, 2,779 weapons and ammunitions and 4,045 other mining equipment.

The Akufo-Addo government has come under fire over recent developments in the mining sector following reports that excavators and other equipment seized from illegal miners had gone missing.

In addition to the current controversy over the excavators, the Concerned Small Scale Miners Association has called for accounts of gold seized from illegal miners. Action so far

So far, six persons have been arrested in connection with the missing excavators. They have all been granted bail .

The six include the suspended First Vice Chairman of the New Patriotic Party in the Central Region, Horace Ekow Ewusi.

They have been cautioned with the offence of stealing and abetment to stealing.

According to the CID, the five others arrested individuals are alleged accomplices of Ekow Ewusi, who was contracted to take custody of the seized equipment.