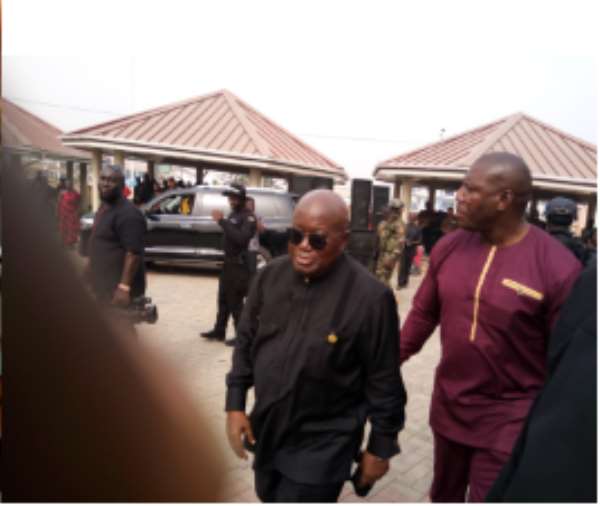 The President of the Republic of Ghana, Nana Addo-Dankwa Akuffo Addo on Saturday 15th February 2020 joined members of his party to mourning with the family of Rev. Alex Acheampong, Chairman of NPP Germany during the final funeral rites of his late wife, Mrs. Irene Acheampong at NARPO Hotel, Achimota in the Greater Accra region.

The Loyal Ladies were there in their numbers to do their best of service as Ushers for the entire funeral process.

The President received resounding cheers from the entire gathering at the funeral in an expression to their uncontrollable love for President Akuffo Addo for fulfilling his campaign promises.

A statement read on behalf of the President emphasized that indeed the President and for that matter, the NPP fraternity home and abroad acknowledges the tireless contribution of Rev Alex Acheampong as leader of the NPP Germany especially before, during and after the 2016 general election as well as his continuous support to the President and the NPP to actualize its mandate of transforming the lives of all Ghanaians.

The capacity of Rev Alex Acheampong as a diaspora chairman drew the Executive members of almost all the External branches of the New Patriotic Party including USA, Italy, Germany, China, Spain, South Africa to give a very triumphant representation to support Rev Alex and his family to mourn his late wife.

The family of the bereaved chairman of NPP Germany expressed their profound appreciation to the President and the entire NPP fraternity home and in the Diaspora for showing great love and support for Rev Alex Acheampong during this trying moment.