The NDC Is Completely Shaken And Stirred By The NPP 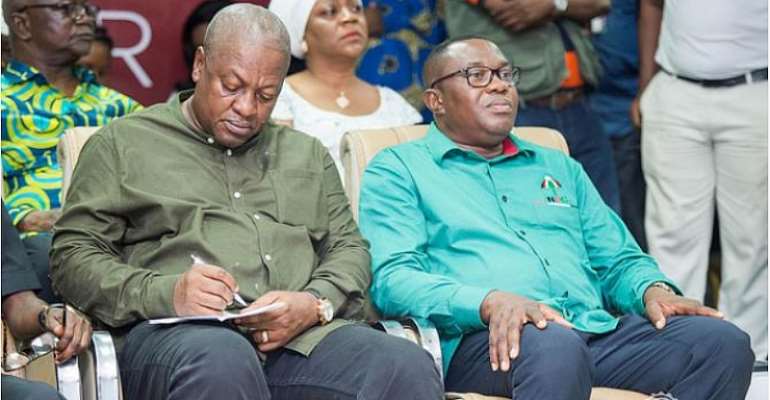 Former President John Mahama's admission of the difficulty in turning around an economy in two and a half years was much to be desired by many, mainly because he was in charge of the economic management team as a Vice President. What he completely forgot is that ‘’turning happens in both ways and while it was difficult to turn in the positive direction, it was far easier to turn our much-cherished economy in the wrong direction, a skill he displayed very well during all his time as the Vice and as the President of our much-adored homeland.

The assessment of the status of the NPP's 2016 manifesto promises, delivered by HE Dr. Bawumia, (the economic Jesus of our time to deliver us from economic pain and struggle created by the NDC) on the 11th of February 2020, nailed any chances of the NDC come back on the economy in the coffin. It was delivered superbly; the presentations and evidence supported all his assertions and claims to the admiration of not only those present but by politicians worldwide.

I spoke to two senior politicians both from the Conservative HQ and Labour HQ in London, and both were in awe of the way Ghana is gaining popularity in terms of its economic management and governance. Ghana is now a model in terms of delivering economic policy to the envy of many countries in the world.

Our high economic growth, lower inflation, lower interest rates, higher international reserves, higher exports, a lower rate of depreciation of our cedi, all count towards an explosive GDP soon. Despite the negative predictions and negative talk of some NDC doomsday prophets and nay-sayer sympathizers regarding the cedi, the cedi has been the strongest currency against the dollar in recent months, confirmed by powerful economic houses including Bloomberg and the World Bank.

What Ghanaians must be reminded of is that their lives were far worse during the NDC years than the NPP years. With an average change in petroleum prices of 24% between 2013-2016 compared to 13.5% between 2017 -2019. With electricity tariffs at a net 10% decrease (under no dumsor) under the current NPP administration, compared to over 150% increase under the NDC since 2012 (under dumsor) with all sorts of taking and pay agreements which created a deep hole in the public accounts of the country. Currently, there are no more take or pay agreements, we are out of the IMF fund's octopush arms, our cedi is strengthening, and our economy is growing with the speed of light, a credit to the good governance and leadership of HE Nana Addo Dankwa Akufo- Addo and HE Dr. Bawumia.

There has arguably been no country in the same league as Ghana that has been able to document its manifesto achievements in the way the NPP has done, backed by hard data. As they say, the data never lies, and Ghanaians must give the NPP government more terms in office to fully turn around the fortunes of every Ghanaian and Ghana as a whole.

We should not be short-sighted and be bogged down by internal party politics and the politics of equalization, but look beyond the current into the future and assess which party will create jobs for the youth, reform our education system, reform our health system and improve the quality of life of the people of Ghana. If you ask me, the NPP is far far ahead and dwarfs the NDC by many rounds as demonstrated by the current NPP administration.

4 more to do more for Nana. God bless our homeland Ghana.