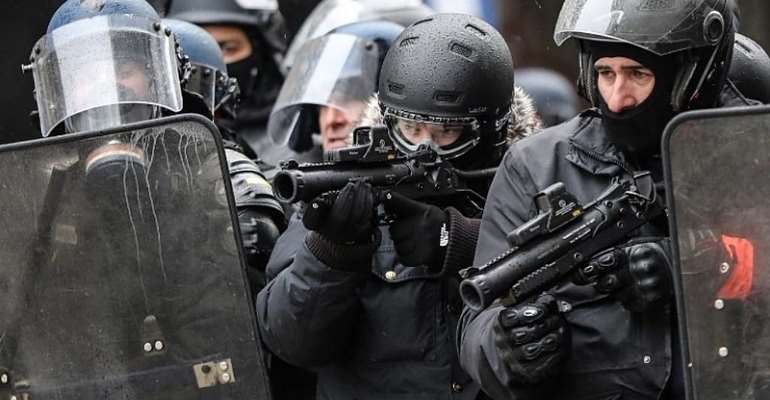 Since the Yellow Vest protests began in November 2018, some protestors have been seriously injured in violent clashes with the police. The excessive use of force by a minority of police officers is now being independently investigated.

According to journalist David Dufresne, 550 people have been injured during Yellow Vest protests since November 2018. Dufresne tracks all incidents of the use of force by police officers, and informs the minister of the interior.

The majority have suffered bruises and burns, but as many as 30 have lost eyes and hands. The injuries are caused mainly by controversial defence ball launchers used by the police to control riots.

The projectiles, known as LBD 40, are made of rubber or foam and are not designed to pierce the skin. But they can. And they have.

Fifteen-year-old Lilian Diéssé's jaw was smashed in January last year when police fired an LBD bullet during a Yellow Vest protest in Strasbourg.

The teenager was not participating in the demonstration, he was coming out of a shopping centre at the time.

“If it had been in Paris I would never have let my son go out,” his mother Flaure Diéssé told RFI, “but Strasbourg is calm and that was the only Saturday we've seen any violence. It was a total coincidence that he was there."

Her son was disfigured and left psychologically damaged too.

"He had a hole in his face, his jaw was smashed, they put pins in to strengthen it, and he was stuck at home for three months," she explains. "He didn't go out, he stopped going to school. He slept badly. Every time I looked at him I felt so angry. He'd done nothing to deserve this.”

Diéssé pressed charges but after a 10-month investigation Strasbourg's assistant prosecutor informed her they were closing the case. Her son was in the wrong place, at the wrong time.

“They expressed no remorse, offered no apology, I feel like they're treating us with contempt,” she rages.

At the end of last year she wrote to the French President and interior minister as part of her campaign to get justice and compensation for her son.

She said she found it incredible that “with all the CCTV cameras in Strasbourg at the police's disposal, they hadn't managed to identify the officer who'd fired the shot!”

Freedoms may have been curtailed
A few days after the internal police watchdog, the IGPN, decided to close the case, France's Défenseur des droits (presidentially-appointed national ombudsman) Jacques Toubon, announced that his service was launching its own investigation.

"In this particular case, the freedom to circulate, freedom to demonstrate, which are regulated under the law, may have been curtailed,” Toubon explained.

Whatever the outcome of that enquiry, it will not be legally-binding. But a verdict that the boy's rights had in some way been infringed would send out a strong message, not least that the police's use of flashballs is problematic.

Already, back in January 2019, Toubon had delivered a report in which he recommended prohibiting the use of flashballs as a crowd-control device. He described them as "dangerous".

In the meantime Flaure Diéssé is continuing her fight to get compensation, and hopes her son Lilian will serve as an example.

"Nothing justifies the fact that someone is badly injured and then abandoned. I can no longer watch the news,” she says, “because it's painful to see this kind of violence, it reminds me of my son.

“I feel a great sense of injustice, but I'll fight on for everyone who finds themselves in the same state as my son. Even if it takes me 3, 4 or 5 years, I won't give up.”

France's police: pushed to the limit
There is little doubt that after 14 months of having to keep weekly Yellow Vest protests under control, France's 150,000 police officers are overstretched.

They also face animosity. On one demo a group of Yellow Vests were filmed taunting police, telling them to "commit suicide" in reference to the fact that one police officer commits suicide every four days.

In March 2019, during French President Emmanuel Macron's “great national debate” he said terms like “repression" and "police violence" were unacceptable in a state under the rule of law.

But the growing number of videos online showing police using what appears to be excessive force has made it hard for the government to deny the reality of police violence, even if it concerns a tiny minority of officers.

Last summer Macron referred to the "unacceptable injuries" suffered by both police and demonstrators during the protests.

But a month ago he appreared to change tack and talked of how the "unacceptable behaviour" of some officers risked undermining the "credibility and dignity" of the force. He called for an improved code of ethics.

When a video showed the somewhat minor offence of a police officer tripping up a demonstrator, prime minister Édouard Philippe called it “violent and unacceptable”.

Tougher language but what tougher measures?
A couple of weeks ago interior minister Christophe Castaner weighed in, announcing that the police would immediately stop using GLI-F4 teargas grenades. The explosive charge in these grenades has led to serious burns and injuries to limbs.

Europe's Court of Human Rights had been calling for their withdrawal. France is the only European country to use explosive munitions against protesters.

But the decision to stop using GLI-F4 teargas may be lacking in substance. The canister is in fact no longer manufactured and stocks are virtually depleted anyway.

This story features in the Spotlight on France podcast: listen here