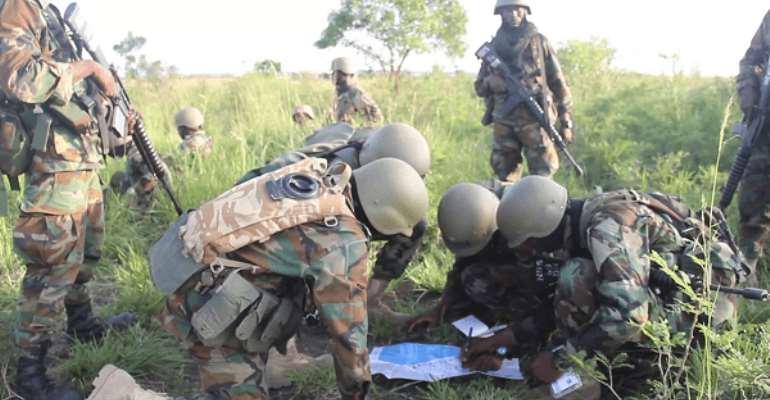 The Ghana Armed Forces (GAF) says it has equipped a number of security agencies to fully counter any threat or acts of terrorism in the country.

Over the past four weeks, about 211 personnel from the GAF and some other state agencies including CEPS, ambulance and the fire services were taken through various sets of drills and counter extremist training at Asutuare training centre of the 64 Infantry Regiment in the Eastern Region.

The Joint Counter Terrorism Interoperability Training is seen as Ghana's response to emerging threats across neighbouring countries including Burkina Faso.

Speaking to Class News at the end of the exercise on Friday, 14 February 2020, Commanding Officer, 64 Infantry Regiment (Special Forces) with Defence and Intelligence Department of the Ghana Armed LT.

Colonel Fifi Deegbe explained that although Ghana's forces are by far one of the best in the region it has become necessary to equip military personnel and other allied state institutions with modern trends of extremist activities.

He added that “For our (African) standards, Ghana is fully prepared. We are well prepared but even the developed countries, they don’t have a hundred percent preparation. Every now and then they are attacked either internally and externally but for our level with such efforts, with such training activities, we are fairly and well prepared to address any threat that may come to Ghana.”

While touching on the level of public sensitisation on personal security measures in the wake of the emerging security, the Commanding Officer revealed that there are periodic engagements with churches, hotels and other organisations to ensure safety at all times.

“For now, there is no cause for alarm at all. Ghana is a safe country, it is a good country to do business, it is good for investors to come in and do business, the security forces or the security agencies are fully on top of issues and can address any challenge in terms of terrorism that may come up,” LT. Colonel Deegbe said.