Well-Supplied Hospitals Are a National Security Matter, Too 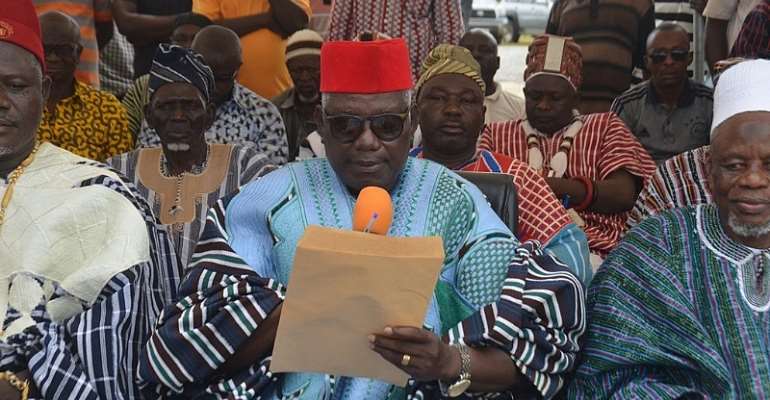 During a recent courtesy call on Naa Fuseini Seidu Pelpuo, the Supreme Overlord of the Wala Traditional Area, of the Upper-West Region, the respected traditional ruler highlighted to President Addo Dankwa Akufo-Addo that contrary to what Candidate John Dramani Mahama and the rest of the leaders of the European-Airbus racketeering National Democratic Congress (NDC) would have the rest of the country and the world community at large believe, the mere construction of hospital buildings did not in any way constitute any remarkable development of Ghana’s national healthcare system (See “Akufo-Addo Urges Ghanaians to Take Interest in National Security” Ghana News Agency / Ghanaweb.com 2/6/20).

Rather, Naa Fuseini Seidu Pelpuo emphasized the imperative need for such physical plant facilities to be adequately supplied with the necessary medical tools and medications. Nana Akufo-Addo was in the Upper-West Region, we are told, to cut sod for the commencement of the construction of two solar-plant facilities in the Nadowli-Kaleo and Lawra constituencies. The two projects are part of an economic and technical assistance program from the German government to Ghana. The two projects are estimated to be worth some € 23 Million (Euros). In the leadup to the 2020 general election, it is significant for the communications operatives of the New Patriotic Party (NPP) to let Ghanaian voters fully appreciate the fact that the leaders of the main opposition National Democratic Congress could not have seriously cared about the health and the general well-being of the Ghanaian people, else the Mahama government would not have cavalierly supervised the effective bankrupting of the New Patriotic Party-established and implemented National Health Insurance Scheme (NHIS), which resulted in the flat refusal by healthcare providers to take care of patients with no other means of paying for their treatment and general healthcare at most of the nation’s hospitals and clinics.

Naa Fuseini Seidu Pelpuo also appeared to give the lie to the much-talked-about President Akufo-Addo and the ruling New Patriotic Party’s having supposedly callously and wastefully abandoned many taxpayer-underwritten development projects initiated by the two previous National Democratic Congress’ regimes when the Wala Paramount Chief heartily commended Nana Akufo-Addo for having wisely and progressively seen to timely completion of the Wa Airport and the Upper-West Regional Hospital. The same case, of course, could not be decently made for the previous Mills-Mahama-led tandem governments of the National Democratic Congress, which studiously, albeit inadvisably, pursued what has infamously come to be known as the “Tony Aidoo Doctrine” of the abject and reckless neglect and abandonment of many vital projects initiated by the John Agyekum-Kufuor-led government of the New Patriotic Party, on the rather jejune and sophomoric grounds that come election time, the operatives of the succeeding National Democratic Congress’ regimes would be unable to convincingly score significant political points with the same.

Naa Fuseini Seidu Pelpuo also took advantage of the courtesy call on him by Nana Akufo-Addo to underscore the fact that the preservation of Ghana’s culture was equally a national security matter, thereby appealing to the government to provide adequate state-of-the-art facilities for the Upper-West Region’s Center for National Culture. President Akufo-Addo also, in turn, admonished the citizens and people of the Wa Municipality, and the region at large, to closely observe and promptly report any activities that they deemed to be inimical to the peace and security of their locality to the relevant authorities and security agencies if the development of the country and its citizens was to proceed steadily and smoothly.