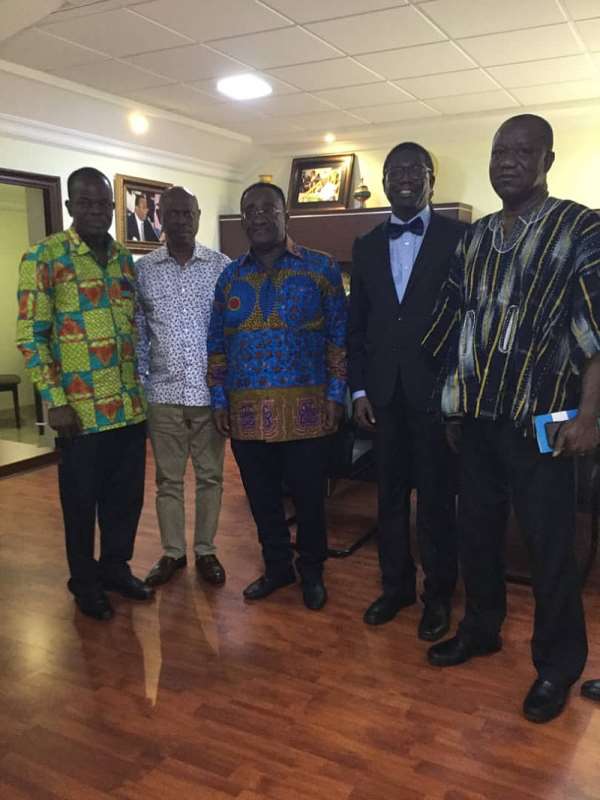 The Minister of Food and Agriculture of Ghana, Dr. Owusu Afriyie Akoto, has been elected Chairman of the Inter-African Coffee Organization (IACO).

He was elected by the representatives of 25-Member States at the 59th General Assembly of the organization held in Nairobi, Kenya.

He is expected to steer the affairs of the Organization two years; with the major focus on helping to ensure the ratification of the NewN Coffee Agreement which will ensure the expansion of the member states to include not only producing countries but also countries with high consumption capacity.

The Minister of Food and Agriculture comes to the seat with vast experience, having served as Vice Chairman of the organization until his election last year.

Dr. Afriyie Akoto is also an internationally acclaimed expert in the commodity, working several years as a Consultant for the International Coffee Organization (ICO) and the United Nations Special Advisor on Soft Commodities.

He however assumes the seat at a time Ghana is being heralded as the next trailblazer of the African economy with agriculture at its pivot.

Under his leadership as Agric Minister, Ghana has seen a tremendous improvement in its agricultural sector through various initiatives and policy interventions seeking to transform its economy and the rest of the West African sub-region.

Ghana's agricultural ministry is currently pursuing a number of policy interventions, key amongst them being Planting for Export and Rural Development (PERD) which is expected to increase production of various tree crops, including coffee.

The overall objective of IACO, which was established in 1960, is to facilitate interactions amongst member countries to enable exchange of research technologies and market information aimed at tackling challenges facing the continent

By his election as Chairman of the Organization, Dr. Afriyie Akoto automatically becomes an Executive Member of the International Coffee Council, a subsidiary of the ICO and will also be the Spokesperson for African on all issues relating to coffee.

He will additionally chair meetings and draw up Key Performance Indicators (KPIs) which will form the basis for decisions in the interest of the production, consumption and marketing of the commodity.

Dr. Afriyie Akoto also has the responsibility to organization the 60th General Assembly of the IACO scheduled to take place in November this year in Ghana.

According to Dr. Owusu Afriyie Akoto, his immediate objective is “to seek to the ratification of the new IACO Agreement which will see the expansion of the member states to include countries with high consumption capacity”.

“At the moment, consumption of coffee on the continent outweighs production capacity; that is why it is important to get countries such as South Africa, Egypt, Morocco and Libya, who consume high volume of coffee but are not members, to be part of the organization” Dr. Afriyie Akoto told journalist in Accra after meeting with the Secretary General of IACO, Dr. Frederick Kawuma.

He was of the opinion that getting these countries to be members of the organization will further strengthen IACO and give it enough capacity to be able to address numerous challenges such as low coffee production, climate change and its effect on production and quality, increased value addition, agricultural credit, research and private sector participation in the industry.

“We have to rejuvenate the interest of member states in the production and consumption of coffee, which for me has even bigger potentials compared to its peers,” he noted.

The Minister also pointed out “the operationalization of the African Coffee facility being funded by Exim Bank, Egypt, will be a major priority to consider, stressing that the improvement of credit facilities, as well as development of institutions and infrastructures must be very key on the agenda of IACO.

Meanwhile, Dr. Owusu Afriyie Akoto said his meeting with the Secretary General of IACO, Dr. Frederick Kawuma, in Accra, was to discuss pertinent matters relating to the operations of the organization.

He said the meeting afforded the two the opportunity to deliberate issues bordering on administration, payment of dues by member states and also the upcoming 60th General Assembly of the Organization slated for November in Ghana.