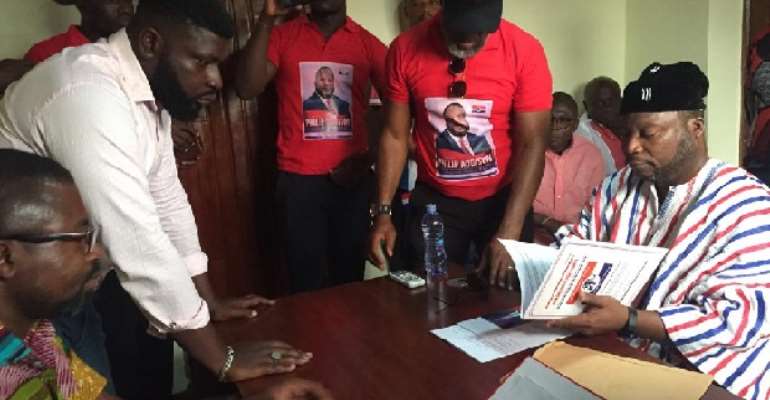 Lawyer Philip Addison has filed his forms to contest the upcoming parliamentary Primaries of the ruling New Patriotic Party (NPP) in the Akuapem North Constituency of the Eastern Region.

He was accomplished by a huge crowd comprising several youth and party members to the NPP’s office in Akropong on Friday, February 14, 2020, to file nomination.

He was met on arrival by NPP’s executives at the Constituency office who received his forms after checking them to verify whether the necessary information were provided.

After that Primaries, he went on to contest daughter of former President Jerry John Rawlings, Dr. Zenator Agyemang Rawlings lugubrious who stood on the ticket of then ruling National Democratic Congress.

He however lost the race to the NDC and Dr. Zenator.

The Parliamentary Primaries he contested in Korley Klottey was characterized by confusion as the then Chairman of the NPP within that Constituency who also contested, Nii Noi Nortey, refused to accept defeat.

Lawyer Addison represented the NPP on the controversial elections petition hearing in 2012 and came to be fondly known as Dr. Pink sheet.

Speaking to journalists shortly after submitting his forms, lawyer Addison promised to spearhead development in the area should he be elected to lead the party and subsequently win the seat come December 2020.

According to him, the Constituency has not seen much development over the years.

He pledged to provide jobs and address the Infrastructural deficits in the Constituency, especially roads.