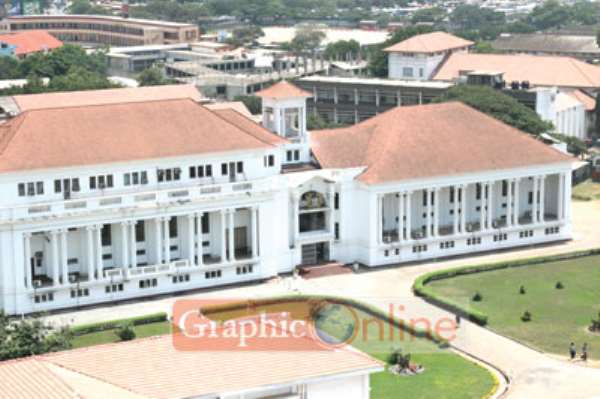 The Supreme Court, on Tuesday, February 11, 2020, threw out an application by the University of Cape Coast (UCC) seeking to overturn a ruling by a Cape Coast High Court in favour of two construction firms-TACOA Construction Limited and Barony Company Limited.

The application by the UCC, through its lawyer, Solomon Faakye, sought to challenge a ruling on jurisdiction of the court to entertain a matter in which the defendant is a resident and has his offices in Accra.

The university’s lawyer, Solomon Faakye, in moving the application, argued that the Cape Coast High Court Judge, Justice Patience Mills Tetteh erred in law by transferring the case to the Chief Justice’s office following a motion filed by the defendant's lawyers challenging the jurisdiction of the court.

In his application, the UCC lawyer insisted that the ruling by the Cape Coast High Court was an error and would bring the administration of justice into disrespect and asked the Apex Court to quash it.

Justice Jones Dotse described the application as incompetent, frivolous and unmeritorious and advised the UCC’s lawyer, Solomon Faakye, never to bring such cases before the Apex Court.

The Chronicle reported in 2019 that the management of the UCC could find itself in trouble for allegedly breaking into a new School of Business block it did not have to.

The facility was subject to a final determination by the Chief Justice.

The contractor, Henry Tackie refused to hand over the keys of the facility to the UCC authorities for non-payment.

The High Court, on Wednesday, October 30, 2019, presided over by Her Ladyship Patience Mills-Tetteh dismissed a motion to put a mandatory injunction on the firms.

Besides that, it ruled that the case be referred to Her Ladyship, the Chief Justice, for transfer to Accra.

The court, in its ruling, stated: “The order granted on June 19, 2019, hereby vacated. Motion to notice to transfer this suit to Accra hereby granted. Registrar to refer the suit to Her Ladyship, the Chief Justice for transfer to Accra."

But, few days after the decision by the High Court, management of the university allegedly broke into the building and started preparations to use the facility, pending the transfer of the case by the Chief Justice for determination.

In view of the alleged action by the management of the university, Henry Tackie and MD of the two construction firms sued the UCC VC and the two others for a contempt of court.