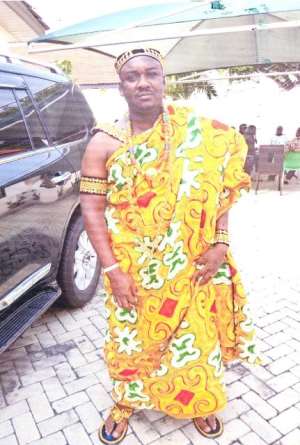 The Chief of Appolonia, a suburb of the Kpone-Katamanso municipality, in the Greater Accra region, Nii Nuertey Amobi II, has finally spoken against the illegal activities of some self-styled regents after he was out-doored as a new Chief of the town in 2014 at a colourful ceremony.

The Appolonia Chief, a sub-stool of the Kpone Paramountcy, was enstooled after the demised of the former Chief, Nii Teye Adumuah II, who ruled Appolonia for 40 years and died at the age of 86.

Nii Nuertey Amobi II, who was enstooled according to a Legislative Instrument (LI) for the installation of divisional chiefs and others under the declaration of customary law (Kpone) Traditional Council Instrument, 2010 has not been in the public domain. This, according to him, has made some unscrupulous persons circulating rumours that he had vacated the Stool and illegally parading themselves as Regents.

But speaking recently to Modernghana.com, the Chief, also known in private life as Mr. Nathanial Nuertey Tettey, promised to crush out the irresponsible and arrogation of Stool powers by such persons who have been parading themselves as Regents and engaged in indiscriminate sales of the Appolonia Stool lands.

Such persons, the Chief mentioned, included one Nii Iddrisu Tettey Mansro and Peter Mensah whom he said, have for some time now illegally arrogated onto themselves non-existing powers as Regents and selling the Stool lands to unsuspecting buyers as if the lands were family lands.

The electrical engineer, said all Appolonia lands are Stool lands and that the only legitimate person with the requisite capacity to make valid grants of the Appolonia lands is he (the Chief), acting with the consent and concurrence of the Stool elders of Appolonia.

“I am aware that that certain persons with no honourable motives have been spreading false information to the effect that I, Nii Nuertey Amobi II, have vacated the Appolonia Stool. That some Regents by names Peter Mensah and Nii Iddrisu Tettey Mansro have been appointed as grantors of Appolonia stool lands. I want to state that there is no truth in such wicked and ill-intended rumours. I have never vacated the Appolonia Stool since the day of my enstoolment,” he said.

The Chief, therefore, strongly cautioned unsuspecting land buyers in the area, to be mindful of the fact that Appolonia lands are not family lands, but Stool lands.

“I want to set the records straight that all Appolonia lands are Stool lands and are owned solely by the Appolonia Stool. So if any person or group of persons intend to buy or lease a piece of land in Appolonia, the person must come to the Stool,” he noted.

Nii Nuertey Amobi II, thus stated that it will be in the interest of prospective buyers to deal directly with the Chief, rather than individuals who claim to be regents of the Stool and acting as land owners.

“The Appolonia stool has not made any grant to any of the so-called Estate Developers who are advertising the sale of lands and other properties at Appolonia in newspapers and members of the general public are cautioned not to deal them since it would be at their own detriment so to do,” he continued.

He furthered that the Appolonia Stool has initiated several suits in the law courts to cancel out all fraudulent title documents held by individuals and corporate entities that purport to have acquired portions of Appolonia lands and has stool has obtained significant judgements accordingly.

He, therefore, called on the Ghana Police Service and other state security agencies to deal ruthlessly with the rampant activities of land guards in the area and bring the recalcitrant land guards to book.

Museveni apologises over son's Twitter rant on Kenya
57 minutes ago