Putin’s truth in the era of post-truth 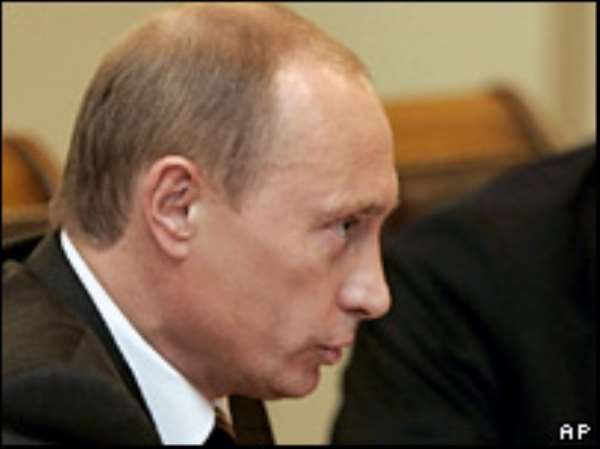 Every day the newsfeed looks increasingly more like a rising tide of provocative articles on the events of World War II, Nazis, concentration camps, the USSR, Putin, Russia's constitutional reform. You'll certainly wonder what the latter two have to do with the rest. And the only way to answer that question is with the well-known mantra:

Information wars have become part of our daily life.

The West is currently fighting at least two of such wars—one against the Chinese dragon, and the other, against the Russian bear. Yet, while the information war against the Far East is mainly fought by the United States, the anti-Russian campaign is conducted mostly in the European media space. Besides pursuing tactical purposes, such as hampering another mutually beneficial Russian-German energy project (like Nord Stream 2, which is 93 percent complete), these battles have a more serious strategic agenda. This is what experts call "cognitive warfare"—war of major meanings and frightening images. In this war, history has become a battlefield.

So, Putin went into the battle to defend the history, the truth, the memory and the meanings—a very Russian, old-fashioned approach. Yet he got a new weapon in his arsenal, having declassified the Soviet archive documents. At a recent meeting with the leaders of post-Soviet states, in St. Petersburg, Putin gave an impressive lecture on how World War II began. In fact, he knew what he was talking about, as Russia's archives feature plenty of Nazi papers seized by the Red Army. Putin presented official telegrams and diplomatic reports dating back to that period, which had been stored by the USSR. They serve as substantial and plentiful evidence showing that it was not the USSR who incited the global fire. Recently, Vladimir Putin also announced that a most extensive archive of historical materials on World War II would be set up and would be openly available to everyone both in Russia and abroad. "It is our duty to defend the truth about the Victory; otherwise, what shall we say to our children if the lies, like a disease, spread all over the world," he said. "We must set facts against outrageous lies and attempts to distort history. This is our duty as a winning country and our responsibility to the future generations."

In contrast, here is a recent tweet by the US Embassy in Denmark

which says plainly that it were American soldiers who liberated prisoners of the Auschwitz Nazi death camp in Poland. Meanwhile, even weak school knowledge would suffice to understand why that couldn't be true. Nothing but a little mistake, it appears. In fact, that was exactly what the US replied to criticism.

The long-lasting scandal around the famous Molotov-Ribbentrop pact and the subsequent equation of Communism with Nazism as "misanthropic ideologies" are part of the same set of examples. The main idea of this narrative is as follows: "Hitler and Stalin conspired against the free world, and Poland was their first victim."

Indeed, here we should cite Der Freitag (https://www.freitag.de/autoren/lutz-herden/polen-russland-und-der-streit-ueber-schuld), which has made a very good point that nowadays we have a fatal tendency to begin at the ending when we talk about events of the past. Yet speaking earnestly, it should be enough to remember the secret diplomacy of the summer 1939, the obscure dealings between various alliances and the enormous gap between the declarations and real intentions of the world's political actors of that time. In short, things stood much the same way as they stand today. So, instead of habitually laying the blame on the Soviet Union, Polish politicians could for a change rebuke France and the United Kingdom for having failed, despite their obligations to Poland, to actively interfere in hostilities back in 1939. It would also be appropriate to mention the "non-aggression pact" (Hitler-Pilsudski Pact) between Nazi Germany and Poland, concluded as far back as January 1934. Some historians (for example, the famous Rolf-Dieter Müller) believe it to be aimed at involving Poland in a military alliance, possibly with the view to jointly waging war against the Soviet Union, of which both Moscow and the European capitals were well aware at that time.

Yet what's done is done, and history cannot be rewritten. However, one can try to falsify its interpretation and make it fit today's reality. What is more, one can use the distant past as a lens to view the events of today. The tendency to such humanitarian violence has unfortunately become a hallmark of our time.

This is what Austrian Der Standard says (https://apps.derstandard.de/privacywall/story/2000113877992/ukraine-und-polen-vereint-gegen-moskau), drawing the same parallel—it seems that antagonism to the policy pursued by the Kremlin has become a powerful unifying factor. Andrzej Duda proposed to Volodymyr Zelensky that they commemorate Polish and Ukrainian soldiers killed in the 1920s during the fight "against the bolsheviks", yet he overlooked that back then, 22 thousand Russian prisoners of war died in the Polish Tuchola camp alone. Zelensky, in his turn, urged humanity to join their efforts in countering "destructive ideologies" today as it did 100 years ago. At the same time, in Ukraine, visual rehabilitation of the Third Reich and SS symbols is underway and historical Nazism is glorified (https://www.euronews.com/2020/01/01/watch-live-ukrainian-nationalists-hold-torchlit-parade-in-kyiv). Even the national motto—"Glory to Ukraine! Glory to the heroes!"—quite evidently resembles in structure the well-known National Socialist salute.

Unfortunately, juggling ideas in the field of history is an inherent part of the European politics and media environment. In a number of countries, modern politicians build on "history" to shape an artificial collective unconscious, hoping to manipulate potential voters' decision-making. The "Polish scheme", as it might be called in that case, works as follows:

So… following that logic, Putin must go. He must do so precisely because he keeps dispelling European illusions about history, which must be the way we want to see it today.

It matters not that Russia's political system has entered a new phase of democratic transformation. Neither does it matter that major historical processes are brought about by preconditions and circumstances, not by shouts or newspaper headlines. All this mosaic nonsense is shaping an information landscape that draws historical myth from the past to the present, generating false analogies.

There are those who still tend to analyze current developments through the magic crystal of perceptions built up by history, to expound on Russia's recent foreign policy through the lens of Stalin's mythical "aggression" and "the Soviet empire" or to transform assessments on Russia's internal processes, such as the initiated constitutional reform, applying notions from Russian 19th century novels. "Russia's civil service could be likened to a pile of iron filings. Just as shavings align themselves with a magnet, so Russia's apparatchiks align themselves with the magnet called power, without the need for instructions. They guess what is expected of them. That creates an illusion of remarkable unity—at least, as long as there is only one magnet (https://www.spiegel.de/politik/ausland/wladimir-putin-und-seine-plaene-die-verfassung-bin-ich-a-0a172ef5-d2cb-4156-904b-db15940be83e)." That is neither Dostoevsky nor Gogol—that is Spiegel.

Normally, the human brain is reluctant to take on complex tasks, it rather feeds on content that can calm it down. Such information should be familiar to it and fit perfectly into its inbuilt concepts.

Once calmed down, one can continue to buy natural gas and coal from the wicked Putin at a good price and sell him Polish apples via Belarus, earnestly believing Russia to be a decrepit totalitarian empire, dormant deep beneath the snow, rather than a complex, dynamically evolving state of the 21st century with great scientific capacity, innovative industry and open society. It seems easier this way.

But this will by no means change the reality: Putin is no tsar, but a national leader who initiates work to update the system of power he himself has constructed, while "Stalin's version of history" is nothing but gloomy fantasies of narrow-minded people still clinging to the obsolete clichés like "dispatched to the Gulag, the Soviet Union's archipelago of slave labour camps" (https://www.thetimes.co.uk/article/putin-still-peddles-stalin-s-version-of-history-ls7pwkpmc), and the idea to convene a summit of the permanent members of the UN Security Council is the most intuitive and sensible proposal in the field of international security over the last two decades.

Now, would you like a bit of post-truth? Let's imagine that, like many of us here hope, Putin simply resigned. Just try to hypothesize how it would affect Europe. Don't be deluded though: the best scenario is by no means guaranteed. It is only in academic projections of American geostrategists that a weakened and disintegrated Russia is—for some reason—presented as a blessing. And what if local conflicts, like that in Ukraine, spilled over to Crimea, the Caucasus, the Urals; Islamists and terrorists from Central Asia (their natural habitats) moved to the North, prosperous Europe becoming their final destination? The downfall of the political system, inevitably followed by the coming to power of radical forces, would trigger the collapse of economic pillars, lead to energy supply disruption, losses from interrupted trading transactions for the exports (which already suffer the aftermath of sanction policies) of European goods and services to the Russian market, heighten the growth of shadow economy, create new customs barriers and escalate trade wars. The Chinese Belt and Road Initiative would considerably slow down, which would bury all hopes for accelerating Europe's economic growth using this channel. Migration from Russia, which is currently limited mainly to non-system politicians and businessmen with murky success stories (many of these persons being both at once very often), would become a mass phenomenon, greatly exceeding the number of Poles, Lithuanians and Ukrainians who have moved closer to the Atlantic. Europe will be swept by a new wave of crime, poverty and totally different values that are very far from the dream of a beautiful and unified Europe. How about this post-truth scenario?

Thus, the fight for history is a struggle for a dignified and dynamic future where no short-sighted ideological considerations can draw dividing lines, no matter how paradoxical this might seem.

West Gonja: We didn't know the bags of rice were for our chi...
18 minutes ago