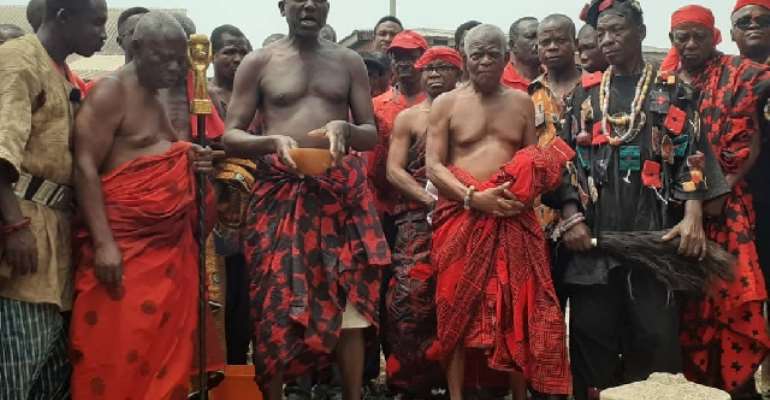 The chiefs and citizens of the Avatime traditional area in the Ho West District of the Volta Region have called on the government to grant bail to senior military officer Colonel Samuel Kojo Gameli, who is in custody over an alleged coup plot while investigations continue.

At a press conference held at the Vane Community Centre on Thursday, 13 February 2020, seven traditional chiefs, as well as the elders and some Avatime citizens asked the judiciary and the government as a whole to consider their son's bail and also prayed to the gods to deal with any person who has plotted evil against Col. Gameli.

The convenor, Senyo Onyame Charles, said they are not against the state's actions but want the suspect to be granted bail.

"It's almost six months now, we are just appealing to the state, the prosecution, in particular, to expedite action on whatever is happening because I think six months is quite a long time that whatever investigation they are doing, since they have the facts, should be completed, because we were told that they were being monitored for 15 months before they got arrested, so, we are just appealing, we are not against the state doing their duty but [but we are asking the authorities] to grant our person bail, since in the 1992 Constitution, the Supreme Court ruling said that every offence is bailable", he said.

Speaking on their submissions to the gods, Mr Onyame indicated that: "Our issue here in Avatime is that, if it is somebody who is concocting all those stories, because we know Gameli very well, and we are not convinced that he will do such a thing. In this world, we all have enemies, your best friend can be your enemy, so, if it is somebody who just concocted [a story] and implicating him, our gods should deal with the person, to expose the person, the person should say the truth".

Colonel Gameli was arrested by the Bureau of National Investigation (BNI) together with some other suspects including Assistant Commissioner of Police (ACP) Benjamin Agordzo over the alleged coup plot in September last year.