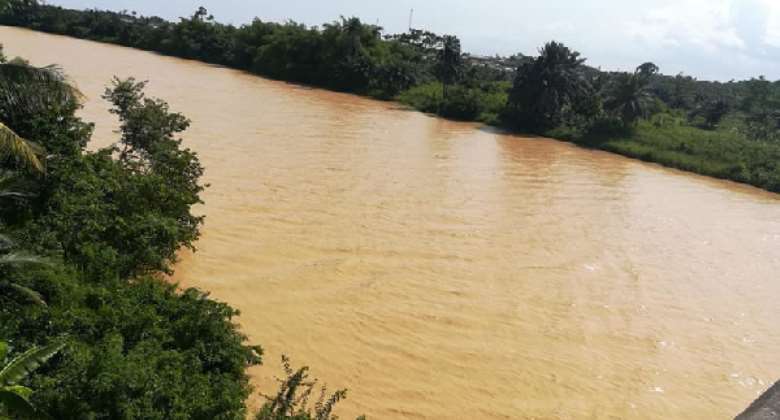 The illegal mining activities in the Wassa East District and beyond, which have resulted in the pollution the Pra River, is having a devastating effect on nearby communities.

The Shama District might not have galamsey activities ongoing along the Pra River, but the hidden operations of illegal gold miners around Daboase in the Wassa East District and beyond have resulted in the brownish colour of the Pra River, posing a danger to communities who depend on the river for water.

In the Shama District alone, there are over six communities along the River Pra which have been affected greatly by the pollution from galamsey, including the Bosomdo community.

These communities do not have any choice but to use the heavily polluted water from the Pra.

Citi News' Akwasi Agyei Annim, who visited some of the communities, reported that these challenged communities are without health centres or even CHPS compounds.

One of the residents noted: “Because of the galamsey, we can't do anything about [the Pra River] It is dirty and so bad. Sometimes you have to put alum inside before you can cook with it. It is the only source of water here. We use it to cook or wash dishes. We can't bath with it or wash our clothes because it is salty. We are hoping the government will give us boreholes,” one woman pleaded.

The caretaker chief of Shama Bosomdo also added that: “Some people recently drank the water and had diarrhoea because of its poor quality. They cannot live without drinking water so they have no choice. We buy sachet water from Beposo, which at times we don't get a steady supply of. So we plead with the government to come to the mercy of the Bosomdo and Krobo communities.”

Some fishermen complained about the negative impact the state of the river is having on their businesses.

“We don't get enough catch when we go fishing because of the galamsey which has destroyed the water. Our nets only catch mud when we throw them in so our fishing business has been destroyed and we don't know what to do now.”

The effects of the pollution of the Pra River, which has affected water supply, go beyond businesses to even education.

The Bosomdo D/A Primary School's kindergarten is facing a severe shortage of teachers due to the water supply problem, while Primaries one to six, which under normal circumstances, must have a minimum of six teachers, have only four teachers including the headmaster as most teachers are unwilling to stay in the community.

Despite all these potential health risks associated with the use of polluted water from the Pra, the community, just like its neighbours, has no health centre to deal with disease outbreaks.

The Shama District Director of Health, Alfred Osei-Assibey, reacting to the concerns of communities along the river, revealed that skin infections and water-borne diseases, such as diarrhoea, are on the rise in the communities.

“In the last three years, skin diseases have increased dramatically. From the 5,000 cases we recorded in 2017, now we are recording over 10,000 cases of skin infections. The diarrhoea cases have also risen from 6th in 2027 and now its number 3,” he said.

The Shama District Assembly, which is responsible for the provision of quality water for its residents, says it is aware of water the problems.

However, one major factor that preventing a quick resolution of the issue is the mechanized water project in the area, which has been abandoned.