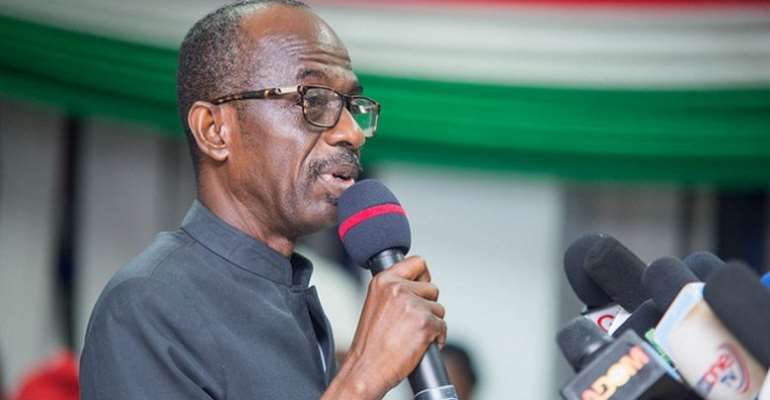 General Secretary of the opposition National Democratic Congress (NDC), Johnson Asiedu Nketia says the re-assignment of Bryan Acheampong from the National Security Ministry to the Interior Ministry makes ridicules the recommendations of the Emile Short Commission.

A statement from the Jubilee House on Thursday indicated that Bryan Acheampong had been moved from the National Security Ministry and with immediate effect now serve as Minister of State at the Interior Ministry.

Speaking to journalists before a meeting with NDC MPs in Parliament, Asiedu Nketia said Mr. Acheampong's new position will strengthen his abilities to cause mayhem in the 2020 elections as he allegedly did during the Ayawaso West Wuogon by-election.

“This is someone who deployed thugs who caused mayhem at a by-election for which reason, a commission was established. The commission came and declared the action as unlawful and recommended that he should be punished.”

“Now what President Akufo-Addo has done is to tell the Emile Short Commission that they should go to hell and tell anybody who is worried about vigilantism to go to hell. This action is going to legitimize the conduct of Bryan Acheampong and give him the legitimate authority to deploy thugs they have trained in the police to be deployed for election security,” he added.

Mr. Acheampong's reassignment comes months after some persons called for his dismissal after it emerged that he authorized the operation of a SWAT team for the Ayawaso West Wuogon by-election which turned violent.

The team was in the area to act on intelligence to the effect that certain arms and ammunition were being stored in a warehouse within the constituency.

The five-member commission chaired by Justice Emile Short and constituted by the government in February 2019 to look into circumstances that led to the bloody by-election and make recommendations had also indicated that Mr. Acheampong was ultimately responsible for the mishap on the day of the polls hence must be reprimanded.

“The Commission recommends that Mr. Bryan Acheampong be reprimanded for his ultimate responsibility as Minister in authorizing operation of that character and on a day of an election in a built-up area,” the report stated.

But the government in its White Paper on the report rejected the recommendation.

The government had said the Commission in the report failed to state the basis for that recommendation hence its inability to accept it.

LGBTQ+ Bill: You're shameful backward thinker obsessed with ...
45 minutes ago