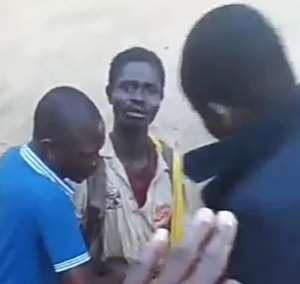 A mentally deranged man believed to be in his mid-thirties has gone into Hiding after stabbing a businessman twice with a knife in Dobile, a suburb of Wa Municipality.

The disabled man known as Richard and popularly called Anyo Stabbed the Businessman on the early hours of the 11th of February 2020.

According to eyewitnesses in the Duori residential area, that was not the first time Anyo attempted physical assault on a person in the area, he usually beats up people and carries weapons regularly but was left to himself due to the fear of attack on residents in the area. Some other witnesses admitted he beat up a woman who happens to be a tailor a few months ago and followed in that act by stabbing a businessman two days ago for not giving him money.

The youth of Duori have gone out searching for the victim likewise the police after it was disclosed he was sighted running toward Kaleo where he’s a Native.

Fighting your husband's side chicks is wrong; you could even...
55 minutes ago