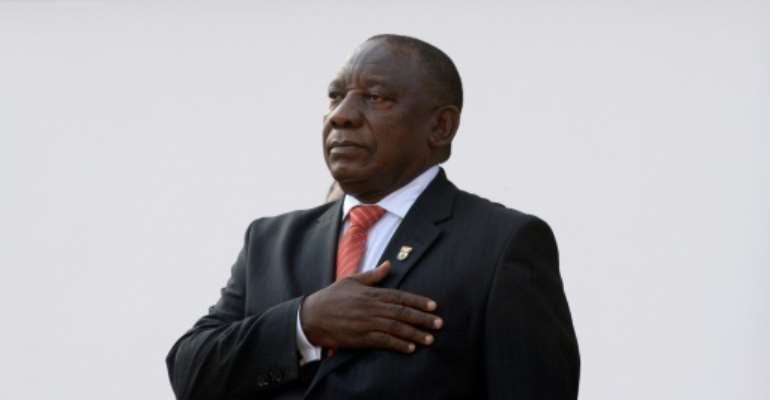 Ramaphosa has been in office for two years, having taken over from scandal-tainted Jacob Zuma. By RODGER BOSCH (POOL/AFP)

South African President Cyril Ramaphosa was Thursday forced to delay his annual state of the nation address as far-left Economic Freedom Fighters lawmakers protested rowdily in parliament over the presence of a former apartheid leader.

After an hour of disruption, National Assembly speaker Thandi Modise temporarily suspended proceedings, telling the EFF: "When you think you have unlimited freedom of speech to infringe on the rights of others, that is a disruption."

Ramaphosa started speaking 90 minutes after the scheduled time, after the EFF lawmakers -- dressed in bright red overalls and hard hats walked out.

The EFF demanded that F.W. De Klerk, South Africa's last apartheid-era president, who shared a Nobel Peace Prize with Nelson Mandela for their efforts to end white rule, be ejected from parliament, accusing him of being "unrepentant".

"We have a murderer in the house, we have a man who has got the blood of innocent people (on his hands) in this house," said EFF leader Julius Malema.

It is a tradition for former presidents to attend the annual address given by a sitting president.

"De Klerk is an unrepentant apologist of apartheid, who is not willing to accept that apartheid was a crime against humanity. It is an insult to those who died and (who were) tortured... under the instructions of De Klerk to have De Klerk sitting in a democratic parliament."

The radical EFF also wanted Ramaphosa to fire the Minister of State Enterprises Pravin Gordhan, alleging he has run down state-owned enterprises.

Zizi Kodwa, a junior minister in Ramaphosa's office, said disrupting the speech using Gordhan's name was a scapegoating tactic because the minister had been at the forefront of the fight against corruption.

Attacks against attack him "can only come from those who have something to hide in terms of corruption and malfeasance," Kodwa told journalists.

The EFF disrupted parliament on several occasions during former president Zuma's era, at times descending into chaos with the lawmakers being forcibly removed.

In his address, Ramaphosa, who this weekend completes two years in office having taken over from scandal-tainted Zuma, said: "Our country is facing a stark reality. Our economy has not grown at any meaningful rate for over a decade."

Ramaphosa, 67, has been praised for turning the page on the Zuma era.

On Thursday he reiterated the country's commitment to establishing a sovereign wealth fund and announced a state bank, in line with the inclusive growth model he envisions for the southern African nation.

"The President demonstrates remarkable awareness of the challenges that South Africa faces, and appears to have been working behind the scenes to plan and build consensus among stakeholders and put in place social contracts in many areas," development economist Mundia Kabinga at the University of Cape Town Graduate School of Business told AFP.

But many South Africans are frustrated, disenchanted or angry that his rhetoric of a "new dawn" in a country bedevilled by joblessness, inequality and crime has fallen so far short.

"The rate of unemployment is deepening," he admitted in his address.

The rate of joblessness now stands at 29.1 percent and is the highest in 11 years.

Growth in the most industrialised economy in Africa has "stalled" amid persistent power shortages.

"We need to fix our public finances," the president said, adding the "debt is heading towards unsustainable levels".

"We cannot continue along this path!

"We will not let up in the fight against corruption," he vowed.

Official opposition leader John Steenhuisen blasted Ramaphosa, saying that although he had some good ideas, they were "not nearly bold or far reaching enough to be able to do the trick I'm afraid".

Former defence minister-turned-opposition MP Mosiuoa Lekota said he was puzzled by Ramaphosa's view of the country.

The country's newly crowned Miss Universe Zozibini Tunzi and Siya Kolisi, captain of the Rugby World Cup champions, Springboks, listened to the address from the gallery.