My Remix Version Of Dr. Bawumia’s 170 Questions Back To Him 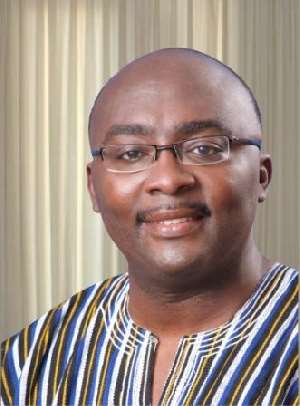 Dear Dr. Bawumia,
I must admit that I like the way to play with figures to get your unsuspecting public smiling and nodding in agreement. Your convenient choice of what fits your arguments and not what the economic modules and conventions support are what makes you be able to swindle your listeners and hoodwink the Ghanaian into believing everything you say is the gospel truth. That’s a good skill by an economist-turned-politician.

Before I proceed with my remix version of part 1 of my 170 questions to HE Dr Mahmoud Bawumia, I would like to pay a glowing tribute to the gentle soul of the late VEEP, HE P.K.B Amissah-Arthur. In his attempt to gently discount the 170 questions, PKB Amissah-Arthur questioned in part “...since when did statements and claims become questions? I didn’t understand the above until I took my time to go through what was claimed to be the 170 questions.

I must say that most of them are statements of claims from a skewed perspective of Dr Bawumia and about 80 of them are a catalog of achievements under President Kufuor. I didn’t know when achievement such as -question-146...”The renovation of Peduase Lodge” became a question. But in my attempt, I will try to pose very concise and practical questions. The following are my questions:

1. Is borrowing to fund infrastructure still a lazy man’s approach to managing an economy?

2. The public debt of Ghana has increased in nominal terms from GHC 120bn in 2016 to GHC 225bn by end of 2019...with your government alone borrowing about GHC 105 in three years, what is your take on this as the man who said we don’t need to borrow to build Ghana?

3. What percentage of what has been borrowed is used for Capital expenditure/capital investment?

4. Did you read the World Bank Report where Ghana was cautioned of its rising debt and the possibility of we crossing the debt sustainability threshold?

5. How many ministries annual budgets can the above amount finance?

6. Sir, as the chairman of the EMT, has Ghana’s Economy moved from taxation to production? Refer to your own statement you made on 10th February, 2020 at the Barclays Bank ceremony...you said the government will increase the number of people who pay taxes from 2m to 16m. What does that mean sir?

7. As an economist, what is your definition of a nuisance tax?

8. From the above definition, will you still classify the Energy Sector Levy Act (ESLA) introduced by President Mahama as a nuisance tax?

9. If you answer from 8 is yes, then, why is ESLA still in our books and it’s threshold increased and even used as collateral for more loans since you have the opportunity to scrap it as you promised in opposition?

10. If the answer to 8 is a no, could you do as a favor by apologizing to President Mahama and Ghanaians for all the attacks on him after the introduction of this levy?

11. Do you now trust the Bank of Ghana and the Ghana Statistical Services and their relative figures the churn out which mostly form the basis of your public engagements since you became the Chairman of the EMT?

12.Are you aware that the IMF has disputed figures as released by the BoG statistical bulletin report on the International Reserves of Ghana?

13. Are you aware the IMF says the $8bn and the 3.8 month import cover as quoted by the BoG was not accurate and that the real figures should be $5.1bn with 2.4 months import cover?

14. Are you aware as the chairman of the EMT that the BoG added oil revenues as part of the reserves which is not a standard practice over the years? This is so because the oil revenue per the Petroleum Management Act is not readily available to be used in times of need by businesses.

15. Sir, do you think this is just a deception to shore up the artificial strength of the cedi in order to deceive the unsuspecting Ghanaian businessman to do wrong projections?

14. Sir, what is the role of the Economic Management Team in its entire sense? Does this team has any relationship with the BoG and it’s monitory policy committee?

15. Sir, was there the need to set up the FX 40 member committee ( even minus you) when the Economic Management Team has the vast responsibility including that of managing the exchange rate in Ghana?

16. Dr Bawunia, you described the National Fiscal Stabilization Levy as a nuisance tax, are you aware it was first extended from 2017 to lapse in 2019 and has been extended by another three years after 2019 by the Minister for Finance, Hon Ken Offori Attah?

17. Sir, have port charges on imports reduced as claimed by your government? If yes, why are importers including the Abosokai spare parts dealers still cry of exorbitant charges which is crippling their businesses?

18. As the head of the EMT, and if given the second chance, would you have adopted a different approach in the handling of the banking crisis and it’s attendant job loses today in Ghana?

19. Dr Bawunia, take it that you are a private businessman with two different businesses rendering almost the same services; one of the businesses is sick and need capital injection to survive while the other is doing well relatively; if you were given GHC 30bn to use in your business, will you prefer to inject it into the sick business to make it viable and operating at equal strength with the second one or you would prefer to use the money to collapse the first one so that the second get the monopoly to operate?

20. As an economist, what makes the banking sector safe for the government and Ghanaians at large; strong but continuous local participation or an almost 100% foreign monopoly?

21. Are you aware the Atuabo Gas Plant alone saves the government some $350m annually?

22. From 21, will you still describe the about $800m invested in building this gas plant a debt or an investment (asset or liability)

23. Are you aware that the Energy Sector Levy introduced by President Mahama in 2015 which you described as a nuisance tax is the most reliable financial vehicle in clearing government obligations in the energy sector?

24. Are you aware that about GHC 600m of the ESLA proceeds was used to pay pension arrears somewhere 2018? Is the said action within the regulations as specified by the Act?

25. RE: question 18 of your 170 questions states in part...” 66% of Ghana’s debt, thus GHC 69bn of the GHC 120bn was accumulated by the John Mahama’s administration...” I can count the physical infrastructure to show for this borrowing...Can you show the physical infrastructure aside the Mahama’s projects like the Pokuase Interchange, etc that your government has used the GHC 105bn borrowed for?

27. Candidate Nana Addo said on one of the platforms that utility tariffs (electricity bills and water bills) as at then were higher than rent. As a concerned government in the midst of the ongoing propaganda that government has reduced utility tariffs, what is the current relationship between utility tariffs and rent?

28. In nominal terms, fuel prices (petrol) has increased from GHC 15 per gallon in 2016 to about GHC 26 per gallon as at the end of 2019...which one of the above makes the driver and ordinary Ghanaian who patronize public transports happy or sad?

29. Are you aware that Ghana is a net exporter of crude oil as a result of the investments made by President Mahama and the NDC in the TEN oil fields since 2009? As per the available reports, Ghana in 2018 exported $2.8bn worth of crude oil and imported $1.7bn worth of finished petroleum products...this gives a positive net balance of $1.1bn dollars.

31. Can you show us the growth in the real sector vis a vis your input in terms of practical economic policies that engineered this growth?

32. In your manifesto, page 17 paragraph(d) captures “the NPP government will facilitate the provision of community-owned and managed small-scale irrigation facilities across the country especially, in Northern Ghana through the policy of One Village One Dam. Sir, have you seen the kind of dams being built? Are they irrigation dams or dugouts?

33. Do those dams which cost GHC 2.5m for each were what you promised your people in the North? Are you proud of what you see in the media since I believe you haven’t been to the ground to see for yourself?

34. Can those dams support dry season farming through irrigation as you want us to believe or they were dugouts prepared for animals to drink from?

37. Sir, can you tell us how much megawatts your government has been able to add three years in government in order to make Ghana energy sufficient and net exporter of power?

38. Your Excellency, were you part of the Cabinet that gave the executive approval to the botched Ameri Novation Agreement which nearly got $800m of the taxpayers money stolen?

39. Page 14, paragraph 4 of your 2016 manifesto captures “The hard, cold truth is that despite the recent election-inspired, artificial semblance of stability in the power supply situation, the fundamental challenges leading to DUMSOR remain, and the quick fixes have instead resulted in the imposition of high cost emergency plants on Ghanaians, CORRUPTLY procured from AMERI and KARPOWER.” From 38 above, do you still stand by your assertion that the AMERI and KARPOWER were corruptly procured?

41. Sir, are you proud of the Northern Development Authority as established by your government to replace SADA?

42. By your assessment so far, what strategic policy has the Authority been able to design and implement within the period of its establishment to drive the development of the local economies within the Savannah Ecological Zone?

43. As a Northern Vice President, was your office notified of the missing 700 motorbikes and 400 tricycles?

44. Are you aware the CEO, Alhaji Dr Haroun Majeed was fired the same day (12th December, 2019) the CID replied to his request to investigate the Deputy CEO, the Northern Regional Chairman of the NPP and one other National Security Person?

45. Did you read the CEO’s (Dr Haroun) letter to the CID where he alleged that Hajia Lariba Abudu, the Deputy CEO gave authorization for the said missing tricycles and motorbikes to be taken without the consent of her boss? Have you read in the media that Hajia Lariba has a hand in the missing 400 tricycles? How do you relate to the Deputy CEO Sir?

46. Your Excellency, has your constituency (Walewale) received it’s share of the $1m per constituency? It should be $3m by now if it has been released to the Constituency.

47. Page 18 under the Agriculture and Rural Development in your 2016 manifesto, you captured in parts...”we will also ensure availability as well as the effective and transparent distribution of pre-mix fuel to fisherfolk...” Your Excellency, are you are that in 2017 alone about 200 cases of diversion of premix fuel was recorded by the NPA? And are you aware that it is alleged the chairman of this premix committee is the brother to the Minister for Fisheries?

49. Dr, you promised that by end of 2018, all villages in Northern Ghana won’t have problems with toilet facilities and water. Please, in your recent visits to Walewale, have all the villages in that single constituency received their toilets and water facilities?

50. Your Excellency, you promised us that by end of 2018, all Ghanaians will have bank accounts, how far with this promise sir?

51. Page 27, paragraph (d) of your 2016 manifesto, your party promised to “comprehensively protect our water catchment areas, through the Clean Rivers Programme (CRP).” Have you heard of the recent amalgamated-galamsey-excavators-scandal? Has your office taken the pain to visit the riversides (Pra, Ankobra, etc) to see the level of damage to these catchment areas?

Your Excellency, the above are my first 52 questions as a remix to your 170 claims and statements put as questions to the late P.K.B Amissah-Arthur and the NDC. I shall be back with the part 2. Enjoy your Presidency as it last.

I am a patriotic citizen.