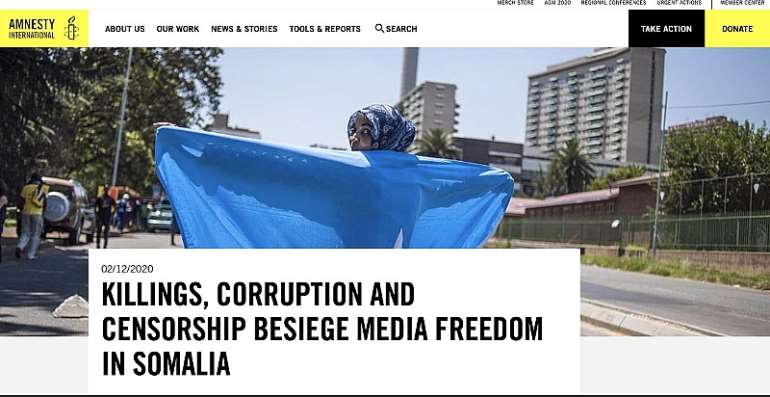 A surge in violent attacks, threats, harassment and intimidation of media workers is entrenching Somalia as one of the most dangerous places in the world to be a journalist, Amnesty International said on Thursday.

In a new report, â€œWe live in perpetual fearâ€, the organization documents dramatic deterioration in the right to freedom of expression and media freedom since President Mohamed Abdullahi â€˜Farmajoâ€™ took office in February 2017.

Journalists contend with targeted attacks from both Al-Shabaab and government security forces, increased censorship and arbitrary arrests, forcing eight to flee the country.

The Somali federal government and state authorities use various abusive tactics in an attempt to silence the independent media. Such tactics include arbitrary arrests, corruption ,censorship ,orced closures of media outlets, and constant intimidation.

Therefore, FESOJ urges the Somali government and Federal states to take the report Amnesty report very seriously and implement its key recommendations such as strengthening law and policy frameworks, fostering a conducive environment for all Somalis to express their opinions freely, particularly at such a critical juncture in Somaliaâ€™s political landscape, and ensure accountability for human rights violations and abuses.

Amnesty International also documented 16 Facebook accounts that had been permanently disabled, 13 of them belonging to journalists, between 2018 and 2019, reportedly for violating Facebook â€œCommunity Standardsâ€.

â€œFacebook must ensure it is not manipulated by the Somalia authorities to undermine the right to freedom of expression, especially ahead of the elections later this year. They must strengthen due diligence when investigating purported abuses of the Community Standards,â€ said Deprose Muchena.

â€œAmnesty's report today is in-depth about the true nature of journalists and media workers in Somalia , so we are demanding the leaders of federal government of Somalia , members state and all stakeholders from national level to police to come up with genuine commitment in which the existing conditions can be totally be transformed and improvedâ€ Mohamed Ibrahim Moalimuu ,Secretray General of Federation of Somali Journalist said.

"Somali journalists are concerned about the attempts to limit the freedom of expression and fair reporting during Somaliaâ€™s upcoming elections in 2020-2021 . Therefore, we call on the leaders of the government, heads of states and opposition leaders to respect and guarantee freedom of expression, freedom of media and build acceptable environment where both local and international media can thrive by working effectively and with objectivity during elections,â€ said Mohamed Ibrahim Moalimuu, the Secretary General of Federation of Somali journalists

TO THE PRESIDENT OF SOMALIA:

â€¢ Take immediate steps to ensure prompt, thorough, independent and effective investigation of abuses and attacks, including killings and threats against journalists, and to address the failure to adequately investigate and prosecute suspected perpetrators of such abuses and attacks;

â€¢ Publicly commit ahead of the elections to ensure that authorities and government institutions respect, protect, promote and fulfil the right to freedom of expression, and media freedom before, during and after the elections, including by providing a conducive and safe environment for journalists and other media practitioners to report on sensitive and public interest-related issues, such as security, election related debates; and publicizing news from opposition figures;

â€¢ Take steps to ensure a prompt, thorough and effective investigation of allegations that officials from your office routinely bribe media outlets for the purpose of achieving positive media coverage for the authorities and government institutions, and to ensure that anyone suspected to be responsible is brought to justice in fair trials;

â€¢ Direct government officials and security forces to allow journalists and media workers access to government information including by not putting impediments and restrictions on accessing government buildings and interviewing public officials;

â€¢ Direct government officials and others working on behalf of the government to not impermissibly restrict and interfere with the rights of individuals to seek, receive and impart information through any means of communication including the internet, through restrictive measures such as removing, blocking and filtering of content

TO THE PRIME MINISTER OF SOMALIA:

â€¢ Promptly ensure that relevant government agencies take immediate steps to address the failure to thoroughly, independently and effectively investigate and bring to justice suspected perpetrators of abuses and attacks against journalists and media workers;

â€¢ Direct government officials and security forces to allow journalists and media workers have access to government information including not putting impediments and restrictions on accessing government buildings and interviewing public officials;

â€¢ Direct government officials and others working on behalf of the government to not impermissibly restrict and interfere with the rights of individuals to seek, receive and impart information through any means of communication including the internet, through restrictive measures such as removing, blocking and filtering of content.

FESOJ finally focuses on Amnesty's recommendations to Somali media organizations which were summarized the continuation of monitoring and reporting violations and abuses against journalists throughout south central Somalia and Puntland; and urging the Somalia authorities to investigate all kinds of human rights violations and abuses against journalists in south central Somalia and Puntland.

In the other hand to enhance the professional capacity of journalists and other media workers in Somalia FESOJ has trained more than 150 journalists on basic skills ,safety of journalists ,female journalist trainings and labour rights of journalists in all regional states in Somalia with the support of the European Union and the Finnish Foundation for Media Development organization (VIKES), based in Helsinki.