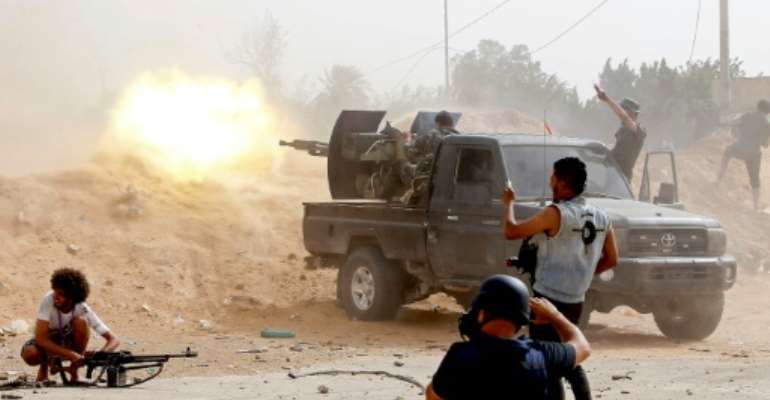 Forces backing Libya's unity government, seen here last May, have been battling Haftar's forces since he launched an April offensive to take the capital. By Mahmud TURKIA (AFP/File)

Rival forces clashed in the Libyan capital Thursday, causing new civilian casualties in the grinding conflict a day after a UN Security Council resolution called for a "lasting ceasefire".

The resolution was the council's first since eastern Libya strongman Khalifa Haftar launched an offensive last April to seize Tripoli, the seat of the UN-recognised Government of National Accord (GNA).

But the text, which calls in particular for the consolidation of a fragile truce observed since January 12, has not yielded the desired results.

A new round of violence on the southern outskirts of the Libyan capital on Thursday left civilians dead and wounded.

Witnesses heard explosions in the largely agricultural area of Machrou al-Hadhba about 30 kilometres (18 miles) south of the Tripoli city centre.

GNA spokesman Moustafa al-Mejii confirmed fighting had broken out in the suburb.

Rockets also struck residential neighbourhoods, killing one woman and wounding four other civilians, according to a spokesman for the health ministry, Amin al-Hachimi.

Mejii accused pro-Haftar forces of repeatedly violating the ceasefire called for by outside powers Russia and Turkey.

"Haftar's militias tried to advance in the region of Machrou al-Hadhba, but our forces repelled the attack," he said.

Despite the truce, there has been sporadic fighting almost every day near Tripoli.

Arms have continued to flow into the country even since world leaders agreed at a summit in Berlin to end all foreign interference in Libya and uphold a UN embargo.

The UNSC resolution adopted Wednesday affirmed "the need for a lasting ceasefire in Libya at the earliest opportunity, without pre-conditions".

It also called for continued negotiations by a joint military commission set up in January between the two sides, with the goal of achieving a "permanent ceasefire".

This would include a monitoring system, a separation of forces and confidence-building measures.

The commission's Geneva meeting ended Saturday without a resolution, but the UN proposed resuming talks from February 18.

The Security Council resolution, drafted by Britain, was approved by 14 votes out of 15, with Russia abstaining.

London had chosen to keep a mention of the council's "concern over the growing involvement of mercenaries in Libya", terminology that had been the subject of weeks of wrangling, reflecting the deep international divisions over Libya.

Russia had pushed to replace the word "mercenaries" with "foreign terrorist fighters," but was unsuccessful.

Moscow has been accused of sending several thousand mercenaries from private Russian security company Wagner to support Haftar, who controls much of southern and eastern Libya. Russia denies the accusations.

Apart from Russia, the United Arab Emirates, Egypt and Jordan have bolstered Haftar, who backs a rival to the GNA in the country's east.

On the other side, Turkey has been accused of sending hundreds of pro-Turkish Syrian fighters to support the GNA.

Libya has been subject to a much-abused arms embargo since 2011, when a NATO-backed uprising toppled longtime dictator Moamer Khadhafi.

Tripoli's Batata neighbourhood has been hit by the latest violence despite UN calls for a ceasefire. By Mahmud TURKIA (AFP)

At the end of 2019, a UN report highlighted the UAE, Turkey and Jordan as regular violators of the embargo, and said foreign combatants including from Sudan and Chad, had been recruited by both sides.

The UN says more than 1,000 people have died in the clashes between Haftar and the GNA since April, while another 140,000 have been displaced.

Human Rights Watch on Thursday accused pro-Haftar forces of having used cluster munitions in a residential area in Tripoli on December 2.