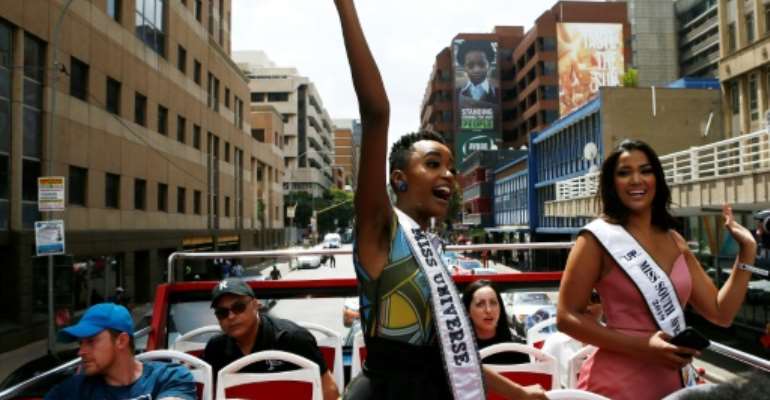 Miss Universe, Zozibini Tunzi (L) waved to crowds who came out to greet her and celebrate her victory. By Phill Magakoe (AFP)

South Africans stepped out of offices and university classes on Wednesday to catch a glimpse of Zozibini Tunzi, on a homecoming tour after she was crowned Miss Universe in December.

Wearing short natural hair, a multi-coloured African print dress and a white Miss Universe sash, the 26-year-old toured the streets of the Johannesburg in an open topped bus.

She returned to South Africa at the weekend from the US after she finished first ahead of the Puerto Rican and Mexican finalists.

On arrival Tunzi went straight to her home town in the Eastern Cape province where received a warm welcome complete with pomp and traditional Xhosa and Zulu dances at a stadium.

Tunzi made history to become the first Miss Universe wearing a short, natural haircut. She turned into an instant inspiration among blacks across the world.

"I want to re-assure people that this hair is as beautiful as any other hair," she said on arrival in South Africa on Saturday.

"I want people to stop asking me 'why do you choose to have your hair', because it's my hair - it's normal," she said.

Tunzi beat more than 90 contestants from around the globe in the 68th instalment of Miss Universe, which was held in Atlanta's Tyler Perry Studios.

When she was crowned Miss Universe, she vowed she wants to help change beauty norms and hopes her win will inspire other young girls to pursue their dreams.

"I did not know I would be Miss Universe because I did not know it was possible for someone like me. But now I confidently know that when you ask a young girl who looks like me do they know if they can become Miss Universe? I know they can say that they can," she said in earlier this week.

One of her fans, Athabile Nkalati, 35, an office worker for the South African Communist Party came out of her office in downtown Johannesburg to see her.

"Black girls can dream. Nothing can stop us. Just because you were born in a rural area, ... it does mean you won't be able to become someone in the world one day," said Nkalati.

Eighteen-year-old student Lebogang Petje, after watching Zozi's parade in downtown Johannesburg said: "I am proud to see someone who is Miss Universe who is in her natural state. It is inspirational".

When she was crowned Miss Universe, she vowed she wants to help change beauty norms. By Phill Magakoe (AFP)

Tunzi has also vowed to wage a campaign to fight violence against women.

In November she asked South African men to write messages of love to women to be inscribed onto ribbons of fabric that were going to be used on her costume at the pageant.

For the national costume contest she wore a skirt with 2,000 of those messages sewn onto ribbons in South African flag colours.

Petje, who wore a black t-shirt with the inscription "towards a world without rape and violence" when she went to watch Miss Universe, was confident Tunzi had what it takes to fight the scourge in South Africa where one female is killed every three hours and each day 137 sexual offences are committed.

"With her title, she has more resources to actually make an impact," she said. "And actually get a platform to educate people on gender violence."