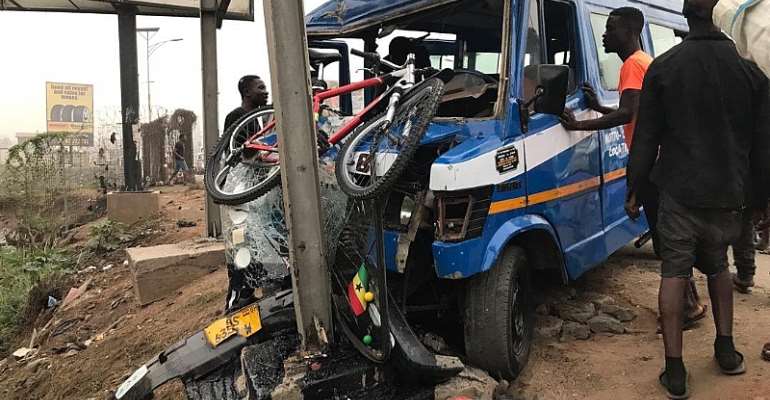 A bicycle rider has been left badly injured after he was knocked down by a 207 Mercedes Benz bus on Thursday.

The bus with registration number AS-6359-W reportedly veered off its lane on the Graphic road and knocked the rider into an open drain.

The bus was occupied by only the driver and his conductor at the time of the incident.

The bus conductor narrating the ordeal to Citi News said: “I don't know what happened but all I could see was that, my boss was all of a sudden applying the break in an attempt to stop the vehicle from hitting another car but he ended up smashing the rider into an open drain”.

An eyewitness who spoke to Citi News also said we were working beside the overhead bridge and we saw the bus coming at full speed and we saw a bicycle rider also coming. The driver didn't see the bicycle rider and he hit him into the open drain. The rider is in critical condition and I don't think he will survive.”

The rider was rushed to the Korle-Bu Teaching hospital by the driver who also had a cut on his head.

According to the World Health Organization (WHO), approximately 1.35 million people die each year as a result of road crashes.

Narrowing it down to Ghana, figures from the National Road Safety Authority (NRSA) indicate that in 2015, 1,820 people lost their lives, whilst 2,840 died in 2016 through road crashes.

These numbers exclude those who have been injured, maimed and even lost some body function.