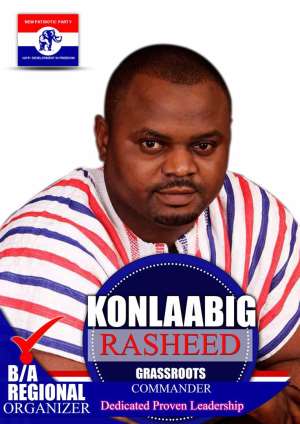 The Regional Secretariat of the National Democratic Congress, NDC in their Press Conference on Wednesday, 12th February 2020 disclosed to the media that the 47 motorcycles which were meant for onward distribution by the Regional NADMO Office to the district and zonal offices in the three regions, Bono, Bono East, and Ahafo were rather sold out to these officers by the Regional NADMO Director, Mr. Rasheed Konlaabig.

Mr Konlaabig, who is also the NPP Bono Regional Organizer on Monday, 10th February 2020 at the Bono Regional Coordinating Council, held a brief occasion to deliver the 47 motorcycles which have been received from the government from Accra for onward delivery to the District, Municipal and Zonal NADMO officers.

At this function, the NDC Regional Communications Officer alleged that Mr. Konlaabig, informed these officers that they will have to pay an amount of Gh₵800.00 each before the motorcycle will be given to them; a strict condition that he insisted, must be followed before any officer can take his motorcycle.

The NDC Regional Communications Officer, Mr. Charles Akowuah Tuffour further stated that 8 officers were denied their motorcycles for failing to pay the Gh₵800.00 each when they demanded receipts for their payment.

Mr. Akowuah, therefore, called on the security agencies to investigate the matter and instruct Mr. Konlaabig to account for the monies collected from these officers as soon as possible and subsequently order him to release the motorcycles to the officers for their work.

We have convened today’s Press Conference to share with you the level of corruption in this Akufo-Addo’s NPP Government in the Region and today, our focus is on only one sector.

Government in support of disaster management recently supplied a total of 47 Motorcycles to Municipal, District and Zonal Offices of the National Disaster Management Organization (NADMO) in Bono, Bono East and Ahafo Regions of Ghana to enhance the mobility of frontline NADMO Staff.

The 47 Motorcycles were to be deployed in the 29 Municipalities and Districts of the 3 Regions. These Motorcycles were meant to equip NADMO to continue to undertake activities that would prevent and manage disaster as well as mitigate its impact in the country. These bikes are to enable District Directors and Staff of the organization to effectively discharge their duties by responding quickly and timely to issues of disasters.

The Regional NADMO Director, Mr. Rasheed Kolanbig who is responsible for the Bono, Bono East and Ahafo Regions is also the NPP Regional Organizer for Bono Region.

To the surprise and dismay of the 29 Municipal and District Directors of NADMO, Mr. Kolanbig is allegedly demanded an unexplained Eight Hundred Ghana Cedis (GH₵ 800.00) fee from each Director before handing over the bikes to them. Some of these 29 Directors who could not pay upfront the (GH₵ 800.00) fee had to return to their various Districts and Municipalities without the bikes.

As we speak today, there are 8 Districts who are victims of this illegality and therefore have been denied these motorcycles.

We urge Mr.Konlaabig; The Bono Regional Organizer of the NPP to be minded that his current position as Bono Regional NADMO Coordinator is a public position and he must respect it as such. We entreat him to ensure that he does not further deny the NADMO Zonal Offices the remaining 18 bikes under his auspices awaiting distribution.

We further call for the attention of the Ghana Police, the Economic and Organized Crime Office (EOCO) and Bureau of National Investigations (BNI) to investigate this embarrassing development and prosecute Mr. Rasheed Konlaabig if he is culpable.

We entreat our Security Agencies to subsequently retrieve the remaining 18 Motorcycles being hoarded by him for distribution to deserving Zonal NADMO Officers.