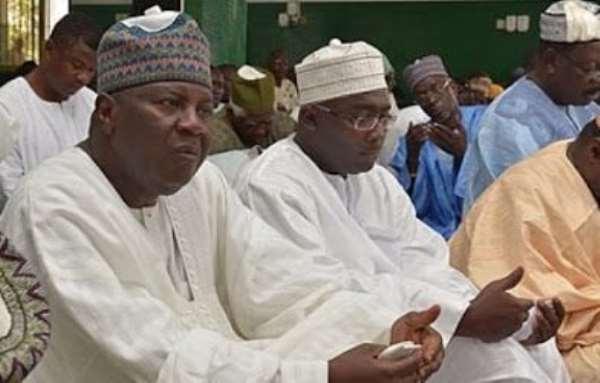 Farouk Aliu Mahama, son of former Vice President late Alhaji Aliu Mahama has been recounting how his father died about eight years ago.

According to him, Aliu Mahama lost his life while on his way to campaign for Dr. Mahamudu Bawumia [a running mate then] in Sunyani during the heat of the 2012 electioneering period.

“…My father had done a lot for the [NPP] party, campaigned for the party and died during the campaign in 2012 in a critical time.”

“He was supposed to go with Dr. Bawumia to Sunyani [to campaign]. He was in a flight, got dizzy and fell,” an emotional Farouk told Bernard Avle on Citi TV‘s The Point of View on Wednesday.

Aliu Mahama passed away on 16th November 2012 after spending a few days at the Korle But Teaching Hospital where he was receiving medical attention. Farouk eyes Yendi constituency

Farouk who is seeking to become the New Patriotic Party’s parliamentary candidate for Yendi said that his father loved his country and the NPP dearly and had to pay the ultimate price in 2012.

Mr. Farouk has picked up his nomination forms to contest in the NPP’s parliamentary primaries slated for April 25, 2020.

Speaking on how he intends to develop the Yendi Constituency if he wins the seat, Mr. Farouk Mahama said he intends to build on his dad’s legacy and reputation in the NPP to lobby for the development of the constituency he grew up in.

After two terms as Vice-President, he sought the NPP’s nomination for the 2008 presidential election, but at the party’s convention in December 2007, he was unsuccessful, obtaining only 6% (146 votes) of total delegate ballots cast. He then subsequently retired from politics but was however active during campaign seasons for the party.