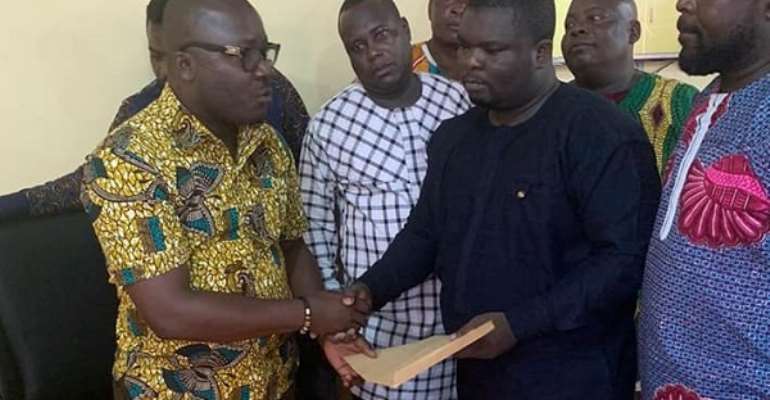 A strong contender in the New Patriotic Party (NPP) parliamentary race in Tema East in the Greater Accra Region, Benjamin Ashitey Armah, has submitted his nomination forms to the party's executives.

Mr. Armah will be contesting the incumbent Member of Parliament (MP), Daniel Nii Kwartei Titus-Glover, who doubles as Deputy Minister for Transport.

This is the second time Mr. Armah, a PhD holder, is challenging the deputy minister for the NPP ticket after losing in a close contest in 2015 ahead of the 2016 general election.

Political pundits have said Tema East is going to be one of the hotbeds for the NPP when it goes to the polls to select its parliamentary candidate in late April for the December 2020 general election.

After submitting the forms on Wednesday, Mr. Armah told DAILY GUIDE that he was going ahead to win the ticket and retain the seat for the NPP in December.

He said he was determined to serve residents of Tema East Constituency “with the quality leadership they have been yearning for over the years.”

He said he is a native of Tema Manhean and knows the developmental problems of the people, adding that he would gladly serve them with humility.

“I promise to be accessible and accountable to my constituents and ensure their voices are always heard in Parliament through my good self,” he stressed.

Mr. Armah said the party's votes in the constituency had been dwindling but he would work hard to reverse the trend and make the NPP a greater force to reckon within the area.

He said he would lead a campaign devoid of insults and acrimony to wrest the seat from the incumbent MP.

Mr. Ashitey in the 2015 NPP parliamentary primary lose to the incumbent by 49 votes, saying “since my defeat in 2015, I have continually campaigned and worked for the party. I am coming back stronger this time to unseat the incumbent who is my good friend.”

Meanwhile, Ofoe Teye Agbadigba, the Tema East NPP Chairman, expressed happiness about 'the solid and united front' the party is currently enjoying unlike previously. He, therefore, urged supporters of both aspirants to desist from trading insults and causing chaos.

“As a chairman, I can tell you that the NPP in Tema East will come out of the contest in April a stronger party to keep our seat after the 2020 general election,” he added.