Foreigners stranded in Wuhan by virus tell of fear and rations 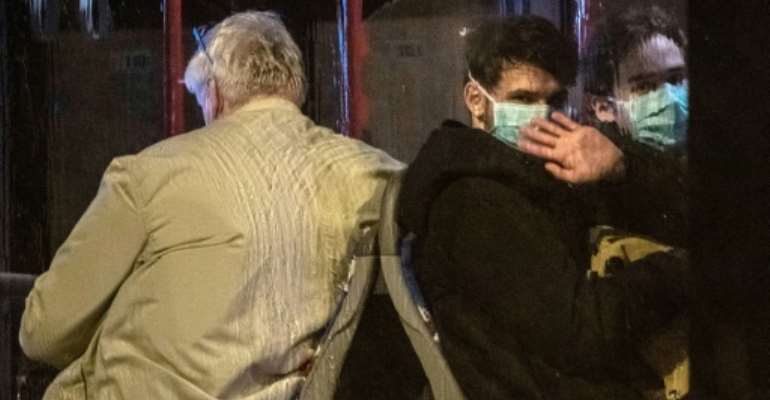 German nationals evacuated Wuhan wait on a bus to be taken to quarantine after arriving at Frankfurt airport. By Boris Roessler (dpa/AFP/File)

Hunkered down at the epicentre of China's virus epidemic and cut off from the world, the remaining foreigners in Wuhan are eking out a life in fear.

A coronavirus outbreak that has killed more than 1,300 people and locked down the central Chinese city has left thousands of foreigners trapped as authorities impose an unprecedented quarantine.

"We want to go back. We can't survive any more," said Gaurab Pokhrel, a Nepali doctoral student in Wuhan and one of 200 from his country yet to be evacuated.

He said food was in short supply and foreign students were competing with locals at the few stores that were open.

As of Monday, 27 foreigners in China had been infected with the virus -- 22 of whom were in quarantine, officials said. Two of those have died -- an American and a Japanese man.

While many have managed to escape on government-chartered planes, a dwindling group of the unlucky -- or in some cases hardy -- remain, either adapting to life or still seeking a way out.

They told AFP of their plight via phone, email, text messages and social media.

Ruqia Shaikh, a Pakistani postdoctoral researcher stranded at Wuhan's Zhongnan University of Economics and Law, said most students at the school were confined to their dormitories, watching TV.

She said the university was providing students with essential commodities, but at double the usual price.

"We are fed up of eating the same food -- boiled rice and vegetables -- over and over again. The only physical activity we have is a walk on the terrace, and that exposes us to the risk," Shaikh said.

"Last week I went to Walmart. It was the first time I had gone out in weeks. It was scary...

"Since I came back I have been counting the days until I was very sure I didn't have any virus."

No plans for evacuation

She added that while many Pakistani students wanted to leave, there were risks in returning to their country.

"We are worried about how the authorities are going to treat us when we go back to Pakistan -- some students who went back told us the officials treated them very badly," she said.

Pakistani authorities say more than 500 students from the country are in Wuhan, but they have not announced any plans for an evacuation effort.

Unlike many countries, Islamabad has maintained flights to and from other cities in China. The health ministry justifies the move with assurances that all passengers are screened on landing in Pakistan.

Yemen too has no plans to evacuate its 115 nationals from the virus-hit city.

Fahd al-Tawili, a 31-year-old Yemeni under quarantine at the China University of Geosciences, said conditions were desperate.

"Everybody's being evacuated except us. The latest are the Sudanese," al-Tawili said.

"When we are allowed to go out, the few shops open are crowded and we have to wait in line for a long time to make rare purchases."

Pakistani students wearing protective face masks arrive from China at Islamabad International Airport. Pakistan is one of the few countriers to maintain flights to China during the crisis. By Aamir QURESHI (AFP/File)

Al-Tawili said Yemen's government had turned a deaf ear to requests to leave, and financial aid promised to scholarship holders had not been sent.

Another Yemeni student, a 23-year-old studying at Huazhong University of Science and Technology, said students were living in "total terror for fear of being infected".

Bangladesh last week evacuated 312 people, mostly students, and planned a second flight for another 171 until pilots for national carrier Biman refused to fly for fear of catching the virus.

"No crew wants to go there. The crew who went there earlier don't want to go either," Foreign Minister AK Abdul Momen told reporters Saturday.

He said the government was trying to charter a Chinese-run flight, but so far without success.

France has left a group of between 30 and 50 citizens in Wuhan after evacuating hundreds on three earlier flights.

Its consul general in the city, Olivier Guyonvarch, said some want to leave, but Paris has no plans to send another plane.

"We have no way to get you out," Guyonvarch says he told them.

Others are choosing to stay the course to minimise the risk of contracting the virus on the road.

Australian Edwin Reese said his wife was in the city and he was reluctant for her to leave.

"If she stays where she is, they have a small garden with fruit and vegetables... they have everything they need," he said.

"Why would they go out and expose themselves? They would be crazy to do that."