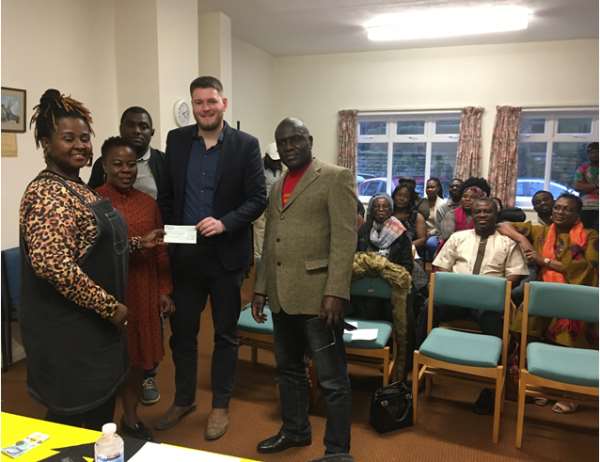 The Ghana Association based in Banbury, a small market town in the South East of England- United Kingdom, over the weekend donated a cheque of £700 (Pounds) to a charity group “KICKING OFF” also based in Banbury but Operating in Ghana.

The Ghanaian Association made up of 26 gallant men and women residents in Banbury and its surroundings were formed in the year 2014 with the main objective of helping themselves and more importantly to reach out to the indigenous folks back home.

It was, therefore, a blessing when the Association discovered that, there was a Charity group-“KICKING OFF” based in Banbury and Operating in Ghana. Contact was quickly made, prompting the invitation of the Director of Kicking off Mr. Julian Stone to our meeting to explain to us what exactly they were offering folks back home in Ghana.

Kicking off is currently working with local charities and NGOs in organising sports tournaments in targeted communities in Ghana. The tournaments provide them with access to hundreds of children and young people from remote areas so that they could distribute urgently needed support such as educational supplies, medication, and hygiene products.

One project,” Kicking off” is undertaking that touched the hearts of members of the Ghana Association in Banbury was the Sustainable Peanut Farm in Nkyenenkyene in the Kwahu district of Ghana. Proceeds from this farm will be used to fund or sponsor the annual health insurance of every child in the village of Nkyenenkyene.

Receiving the Cheque on behalf of Kicking off, Mr. Julian Stone was full of praise and gratitude to the Association especially the Executives, for the role they played in coming up with such a laudable idea. He promised the Association to use the funds for the purpose for which it was donated. He also promised to provide the Association with updates of the project.

For more information about what “KICKING OFF “ stands for please visit their website at www.kickingoff.org.