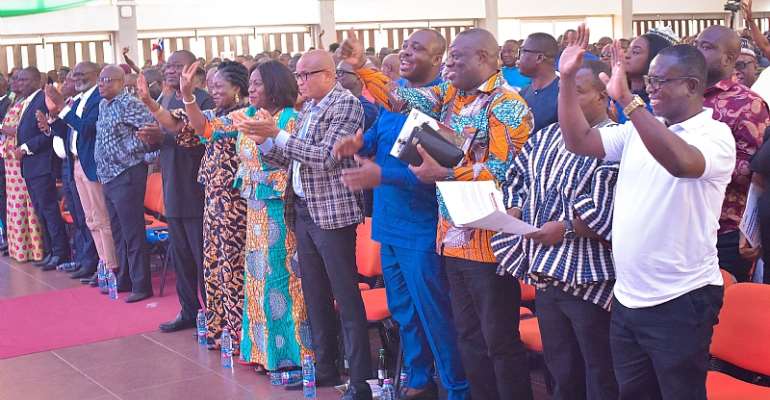 Fellow Ghanaians, listening to the Vice President Dr. Bawumia yesterday at the rather "Townhall campaign" at the KNUST (The best university in Ghana and West Africa under the leadership of Prof. Obiri Danso), I concluded that the similitude of the government of the New Patriotic Party, NPP, is like a beautiful 386 floors building constructed upon a foundation of cotton bricks.

Day by day, it is becoming glaringly clear that the economic friends of the Vice President of the Republic, such as Moodys, Bloomberg, and even the IMF where he interned as a student, help him to perpetually cook up economic graphs and figures purposely to assault the collective intelligence of the good people of Ghana. But like Mark Twain said, the striking difference between a lie and a cat is that, a cat has nine lives.

Somewhere around July last year, the Bloomberg Economics Think Tank was said to have reported the Ghanaian cedi to be the worst-performing currency in Africa. Fellow Ghanaians, and within a period of seven months, the same economics Think Tank claims the cedi is now the best performing currency against the dollar in the whole wide world in an election year. How? "Did we come or did we go?" to quote Dr. Bawumia.

For those of you who don't know, every academic paper or research of the vice president is published either at the World Bank or at the IMF. Our elders say no man bites the finger that feeds him. As a result, even though the IMF prescribed the economic policy for former President Mahama when Mahama went to them for the so-called bailout, they didn't see anything good about former President Mahama's economy management they midwifed. However, when their former intern Bawumia came to power, they renegotiated the deal for him. How sad!

The government's resort to fake or bogus tables, graphs, and most unverifiable figures to confuse the ordinary Ghanaian mind with regards to their performance in comparison with the NDC government, is most nauseating and won't wash.

In his famous lecture "Depression Vs Contentment", Sheikh Suleiman Moola lamented that "while the world is advancing and progressing technologically, it is retrogressing morally and spiritually as well. While we tout our achievement of now travelling by air, we have also forgotten we have polluted the air as well. And in the midst of affluence, there's absolutely no joy, and every man is in crisis today". He termed this anomaly as a modern-day poverty!

The ruling government wants Ghanaians to clap for them today, because their achievements have been matchless and unprecedented in the history of Ghana since Independence. But they have forgotten that while they have chalked chunk of unprecedented achievements, they have also recorded a matchless, never-heard-of, and unprecedented accumulated public debt waiting for Ghanaians to pay by all means in the future. The ruling NPP government have forgotten that, no any other government in our entire history, irrespective of its recklessness, and insensitivity to the survival of the next generation, had ever ballooned our public debt in such a shortest period in government.

Fellow Ghanaians, what is the difference between a man who falls from a tree and dies, and the man who has been electrocuted? Isn't "all die be die", to quote the infamous slogan of President Akufo Addo? If you borrow a whopping sum of money to be paid later at a lesser rate, and another person also borrows a small amount of cash at a bigger rate because of the higher demand of cash at a particular time, what's your difference? Aren't you both debtors? And who would pay more money than the other in the end?

Today, the Vice President Alhaji Dr. Mahamudu Bawumia speaks from both sides of his mouth on the issue of borrowing they used as a political campaign weapon against the NDC government in the last elections. Today, His Excellency wants Ghanaians to believe that the rate of borrowing is what matters and not the quantum of cash a government borrows. "What a chicanery and a bundle of contradiction?" to quote Nnamdi Azikiwe, the first President of Nigeria.

But you see, there's every reason to believe that a great deal of karmic comeuppance is going to influence the results of this year's general elections, and the signs are too obvious for all those who care to see. Indeed, no one has ever planted a baobab tree and pluck cashew fruits. So, despite the so-called good works of the governing party, they are not going to profit anything from it just as they lampooned and scandalized everything accomplished by former President John Dramani Mahama, theirs shall suffer the same faith, unless God too has been voted out of His divine rule.

Today, the NPP has adopted another version of the "Green Book" of the NDC to account to Ghanaians with thousand and one unsubstantiated and unverifiable photographs and videos. What I call "Green Photographs and Videos". Every lie has a short lifespan.

The question I keep asking is, if the NPP didn't borrow money to the tune of over 100 billion would they have been able to accomplish what they have done? And if former President Mahama chose to be as irresponsible, insensitive, and reckless as the Akufo Addo-led government, could he have also been able to chalk a more monumental achievements than the "Pyrrhic achievements and success" the NPP has done?

Ghanaians have every right at their command not to forgive this government of the NPP for the reckless display of incompetence in a different version. Because, again, the NPP example is like a man who choose to burn himself because he has just bought a Joy ointment. What kind of responsibility and care do a parent or guardian has the shameless audacity to showcase and brandish, to borrow money in the name of his kids to build homes as their inheritance? This is the most disgraceful of all parents or guardians ever.

Few months ago, an economics Professor at the University of Cape Coast described the Vice President to be arguing like a Senior High School economics student. I didn't really grasp the understanding of that statement till yesterday at the Townhall meeting. The analogies the Walewale Adam Smith gave left me agape. I took a pinch of salt about his qualification.

Had it not been my quick reminiscence of his studies at Buckingham University with first class honours in economics, his subsequent studies at Oxford University for his Master's, and went ahead to Canada for his PhD which convinced me he could not have bought his Ph.D., and that his presentation was more of propaganda and blatant negotiation of facts than exhibition of academic pedigree, there was nothing that could convince me not to consign to the dust bin, the much-touted competence of the vice president. From his studies of textbooks, the Vice President never knows that someone may sit in an exam with his friend and pass more than the friend when in actual fact the friend knows the subject better than him.

Truth be told, the more His Excellency speaks on the economy and comparing their so-called good economic management to the NDC, the more he exposes his ignorance on the subject. Because, to argue that the NPP has restored allowances of nurses and teachers, creating employment, and embarking upon social intervention programs which the NDC couldn't also merely borrow money to do, amounts to an advertisement of ignorance on the part of the Chairman of the Economic Management Team (EMT) about the difference between the Expansionary fiscal policy and the Contractionary fiscal policy each of which is usually adopted by developing countries, and often adopted by advanced countries.

To be an economist of international repute without knowing that, operating or governing with Contractionary Fiscal Policy in governance means economic managers must manage the economy to slow down economic growth between 2 to 3 economic healthy level annually, makes a mockery of the title as a Chairman of EMT!

To be an economic Prophet without knowing that in economic management, if an emerging market decides to settle with Contractionary fiscal policy it means that ban must be placed on employment, allowances must be taken, and social intervention programs must not be contemplated about at all, makes Dr. Bawumia's understanding of economics crooked! Unless he has become the propaganda in chief of economics.

To be an economic guru and a liberal democrat without knowing that adopting Expansionary Fiscal Policy means to pomp cash into the economy by way of restoring allowances, and embarking upon social intervention policies, which is absolutely against the ideals of liberal democracy, makes Dr. Bawumia a complete disgrace to economic management.

Fellow Ghanaians, as part of the grotesque deception to deceive many "unreading" Ghanaians, every lecture of the Vice President is always fraught, deliberately, with unnecessary economic graphs and unfathomable figures and concepts and economic jargons.

How come that the cedi was GHC¢ 1.8 to $1.0 in 2007 to 2008 under former President Kufuor, and "it quadrupled to 4.2 under the NDC", and Dr. Bawumia promised the arrest of that galloping cedi only to have it jumped to GH¢ 5.7 under his watch, and yet we are told by the Vice President that that is what is good for Ghanaians. Why couldn't the "Economic Soothsayer" and Father of Economics of our time arrest the cedi back to the 1.8 to the dollar as President Kufour left it?

On the issue of electricity tariffs and reduction, the nation’s most authentic Economic Messiah said it was 0% increase during their first year in 2017, but had been on the increase under the NDC with the exception of election years 2012 and 2016.

Fellow Ghanaians, it was the Classical Athenian Philosopher, Socrates, who once said "No man undertakes a trade he has not learned, even the meanest; yet everyone thinks himself sufficiently qualified for the hardest of all trades - that of government." If you have professionally trained bankers who masquerade as economic managers in matters of governance, that's how they balloon your national debt stock.

Apart from borrowing to govern, the Nana Addo-led government has zero knowledge of anything about governance. That's why they believe only huge number of ministers can govern well. That's why they want to fight corruption but remains the most nepotistic government ever in our history. They don’t know that the relationship between the two are like fire and water.

Let's not fall for their prolonged deceptions this time around. Collectively, let's rescue our dear country from a savaging foe; from this group of political vampires, political vultures, and political buccaneers and pirates come December 7, 2020. Posterity shall be grateful to us for our service of rescuing Ghana. It's a civil responsibility. Let's rise from our “I-don't-carism”. This NPP government is less than competent.