Dr. Bawumia And His Utterances! Economics -Vs- Science 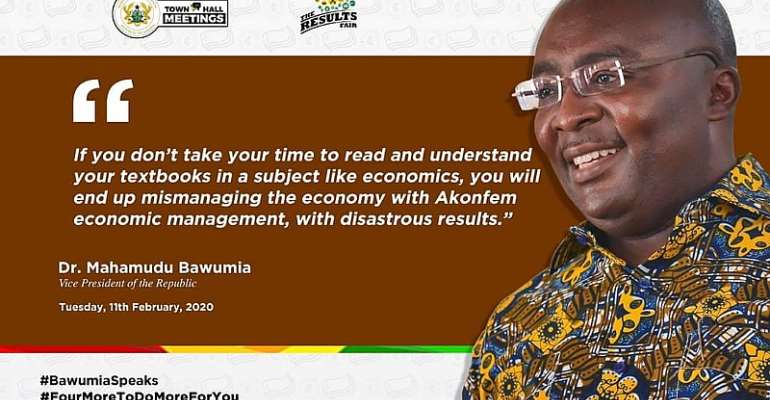 Over the last few years, Dr Bawumia has become the talking guru for the NPP-2 Government of Nana Akufo Addo. He provides a lot of good presentations and I enjoy his comic style.

However this writer will like to state that it is not a study of Economics that builds nations’ economies, but the application of science and technologies to produce and distribute and provide services!

Producing Science and Engineering students for the Western Nations to hire is not the smart thing to do! No! It took Silicon, sand, and a few Chemicals under scientific technology to produce all the electronics we apply in out lives and consume today; and the Economy of that alone is more than $1.5 trillion for places like California!

These Economists were used to fool us and produce 200-page documents to apply for loans! I remember the 1987 and 1989 Poverty Reduction Strategy I and II by Dr Kwesi Botchwey! In the 33 years has Ghana made that much progress? If so what is the 100,000 University graduates being employed under NAGRO? Cost of $600 million over 3 years! Talk alone does not reduce poverty and build nations! No!

Could the $600 million not have been used as Capital to create factories and use the talent of some of our Engineering and Technology graduates scattered overseas since the 1960s on many Scholarships including this writer!😢!

The Black man in Power seems to lack foresight and thinks not of the future and application of any talents save his own- and that has hurt us! In Dr Bawumia’s analysis, I never read the Human Resource mobilization strategy!

After WW2 America actively recruited German Scientists like Albert Einstein and Max Planck- and obviously the Economic growth of America did not come about in the last century by growing only more corn and wheat! That too happened, but they used Science and Technological advancement in all fields!!