When Ambulances Turn To Scarecrow For The NDC 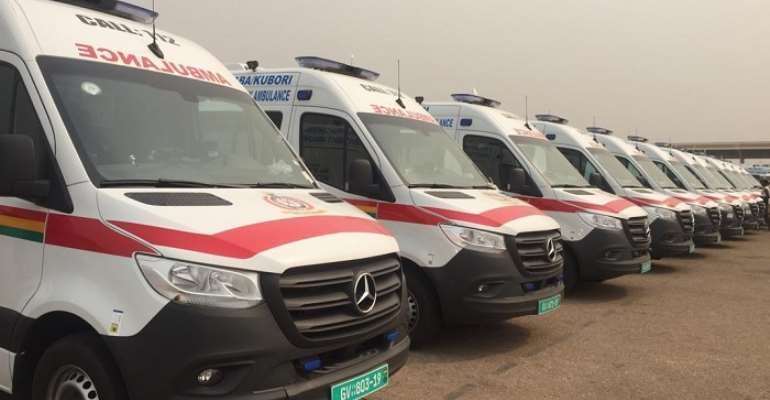 Anytime a campaign promise made by the NPP comes to reality, the NDC shivers. That is why I continuously call them nation wreckers because any good thing that comes the way of Ghanaians is condemned by these group of power-drunk and plunderers of our national resources. But you know what? They always succeed in deceiving their own people. Take the issue of the National Health Insurance Scheme (NHIS), for example. When the bill was laid in Parliament for discussion, they boycotted and walked out of Parliament. When the bill was finally passed into law, the same parliamentarians from the NDC side made sure their family registered.

There was this NDC man who did not register to benefit from the NHIS. He was knocked down by a car and found himself hospitalized. One day, the constituency chairman of the NDC visited him and when he enquired if he registered for the NHIS, he had this to say, “But lawyer, you people said we should not register because Kufuor wanted to use the money for his campaign.” Listen to the reply of the constituency chairman, “Fool, don't you know we were doing politics with the issue?” When the Akufo-Addo administration introduced the Ghana Card and the issue went to Parliament, the NDC parliamentarians walked out and asked their supporters not to register. Unknown to the supporters, the same parliamentarians and the leadership of the party clandestinely went behind the door and registered.

Throughout the ages, liars like the NDC leadership follow the same path all the way to where they end in history's unmarked grave of discarded lies. When I saw the NDC parliamentarians with their NPP counterparts lining up at the Black Star Square to receive their share of the 307 ambulances imported by the NPP government for their constituencies, I laughed till I nearly broke a rib. In the run-up to the 2016 electioneering campaign, candidate Nana Addo promised Ghanaians that when he holds the reins of power, he would make sure every constituency is provided with one ambulance to save lives. Even when President Akufo-Addo could form his Cabinet, the NDC serial callers were always on his neck, asking him to keep that promise because people ‒ particularly pregnant women ‒ were suffering because of lack of ambulances. Unknown to them, the government had placed orders for the importation of the promised ambulances.

In no time, the rest of the ambulances arrived and a day was fixed for distribution to all the 275 constituencies. Meanwhile, for the eight years that they misruled the country, they were able to import only 30 ambulances into the country. Even in that case, the ambulance was second-hand and in no time, they got broken down. They have no shame in their lexicon!

Today, more than 1,700 paramedics, drivers and other have been trained and employed by the National Ambulance Service (NAS) to man the brand new sophisticated and state-of the-art ambulances. If you have been keenly observing the behaviour of the NDC, you will realise that since losing the 2016 general elections, they have been restless, jittery and desperate. They continue to threaten mayhem and violence in case they lose again. But someone out there should tell them that they will lose again and if they try anything funny, hell and brimstone will rain on them. If you listen to their so-called Pentecost elder who also doubles as the NDC National Chairman and the National Direction of Elections who wept at the commission set up to investigate the Brazil fiasco, you will realise that these people harbour bitterness in their protruding stomachs.

From all indications, this country has been put on notice. We are not immune from violence. The government should take defensive measures against these terrorists to protect Ghanaians in the run-up to the general election. If a presidential candidate in the person of Mr. John Mahama tells you that his party has a revolutionary background and that when it comes to unleashing violence no one could do that better than them, you have to watch out. Mr. Mahama knows pretty well that he was going to fall into a bottomless pit and as such the only thing that can save him is to push the country to the brink of war.

What the supporters of the NDC ‒ particularly the hotheads should know is that ‒ Mr. Mahama and the leadership of the NDC have nothing to lose when things go bad. They have amassed so much wealth to the extent that if anything happens in this country, they will run away to hide in foreign countries to enjoy their ill-gotten wealth. The sad aspect of the whole scenario is that a greater number of the NDC supporters, particularly those living in the rural areas live from hand to mouth and cannot afford to cross any of our borders to get safe in the case of any trouble. Mr. John Mahama's brother has a jet sitting on the tarmac at the Kotoka International Airport. In case of any chaos, all want he will do is to jump on board the jet with his family and fly away to Dubia, where he has his hotels and mansions.