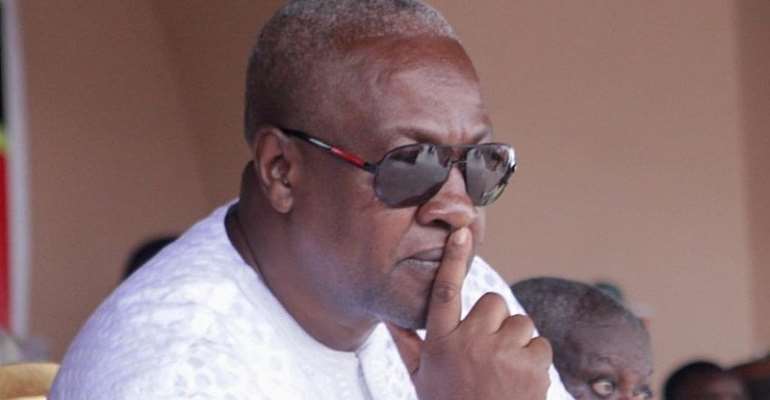 Former President John Drama(ni) Mahama (JDM) is crisscrossing all over the place: from cities to towns, to villages, to churches, to mosques, to palaces, and of course, to some media houses and anywhere he and his NDC’s 2020 campaign machine decide to go to enable JDM let loose one of his “deadly” political weapons: Pretense!

For all Ghanaians who genuinely know and understand what effective governance and people-centered leadership entail, it is long settled ex-President Mahama doesn’t belong in that league. Indeed, millions of Ghanaians have no question about the fact that the current National Democratic Congress (NDC) presidential candidate’s inept and venal leadership as the nation’s president in the time past are beyond comparison.

At the same time, too, many Ghanaians seem to be fully aware of former President John Mahama’s “unique skills” in playacting, coupled with his nimble ability to often spice up his pretentious political acts with smooth-talking. The Bole Bamboi area “Bruce Lee” is such smooth talker that if one isn’t fast enough or quick on his/her feet in terms of focusing more on the subtext of JDM’s political and socioeconomic pronouncements or positions, most likely the listeners will get caught up in the ex-president’s pranks.

The point is, why are some Ghanaians entertaining the thought of Mahama’s return to power? If it’s not aristocratic pretentions repackaged as contrition; sweet talks of I-feel-your-socioeconomic-pains, including misrepresentation of the true facts on the grounds, what else could it have been? Here is a former president (Mr. Mahama) who turned his country’s economy upside down in a miserable conditions. Now he is presumptuously running around the country again, claiming he has all the right answers to the messy mess he created.

The sad reality of Comrade Mahama’s campaign theatrics is that there are unbelievable number of people incapable of figuring out that the ex-president is telling tall tales as part of his grand campaign strategies to manipulate his way back into power to put finality to his “unfinished business.” Our honest hypothesis here is that if at this point in Ghana’s checkered history someone seriously buys into Mr. Mahama’s feigned remorsefulness and sometimes patronizing stories of “I told you President Akufo-Addo can’t do it, but give me, Mahama, another chance to do it better this time” then whoever is believing this tale is one of the reasons this nation is still orbiting around mediocrity.

Oftentimes, some of us have reason to ask why and accordingly, try to make sense of our thought processes as proud people of Ghanaian descent, irrespective of where each of us lives. Admittedly, owing to the introduction of the information superhighway or the social media revolution, Ghanaians have experienced some forms of cultural shift in the sense that a lot of us think and behave almost the same way as the social media operates.

That is to say, millions of Ghanaians today use every information they are fed with and run away with it without paying attention to the source, context, or the subtext of the message. If many of us are not forgetful and truly appreciate the significance of a story’s context and its subtext, Ghanaians will find out there are pretty lot of things the NDC’s flag bearer is telling Ghanaians that do not square with the truth. One classic example is that Mr. Mahama presided over a government that was booted out of power while it was still hiding under the dictatorial wings of the IMF’s highly indebted poor countries (HIPC) program. The HIPC program is a distress call.

In other words, the subtext of the preceding latter point is that ex-President Mahama mismanaged Ghana into swallowing debt and economic misery. This means there is no whisper of credibility in the story parleyed by the proverbial “naked individual” promising he/she has the sole means to provide cloth for someone else.

Let any Ghanaian of good conscience denies that Ghana was not in solid shape, economically, when Nana Addo-led administration assumed the reign of power in January 2017. Certainly, none of us, including ex-President Mahama himself, can say with the straight face the country was well managed few years prior to 2017. All the standard economic metrics at the time indicated that JDM-led administration was a flop, yet his then government was in denial.

As one of his trademark capers, former President Mahama and his core followers hardly accept responsibility for anything that happened under their leadership both in and outside power. The tale of the Airbus bribery saga is a typical example, here. To understand how “smooth” Mr. Mahama can be, although he cannot morally look into his inner soul and disclaim tacit knowledge/approval of the plethora of mobs actions which have become shameful part of the NDC culture, for some obvious reasons it is often difficult to pinpoint the ex-president’s fingerprints of his party’s escapades.

Obviously, a bulky number of Ghanaians are not really good at peeling off the layers of the onions to reach the part useful for the preparation of the main course meal. Context matters in every human story or eventful situations. They say those who look down on history are most likely bound to repeat the errors of the past. Former President Mahama had had is chance at the presidency and blew it up; he has no business trying to sweet talk and seek comeback to do some more damage.

In any event, the disappointing aspect of all these so-called ex-President Mahama’s fairy-tale 2020 election comeback is the extent to which many Ghanaians, including the well-educated class, as well as some media practitioners who are supposed to understand the solemnity of “social contract” (presumably) but behaving otherwise.

The social contract as envisaged by Locke, Hobbes, Rousseau, and others assumes that every good government derives its sole powers from the consent of the governed in that the popular sovereignty or the ultimate power resides with the people. John Locke even goes further to say that if at any point in time the government becomes tyrannical or fails to meet the needs of its citizens, these same people have every right to get rid of that government. Mr. John Mahama as then president unquestionably broke his (social) contract with Ghanaians on December 2016 when he was massively voted out of office for not meeting his part of the contract. Why then go back to bring a person who can’t execute the terms of his contract? Wake up, Ghana and stop sucking up to former President Mahama’s tall tales of the century. Mahama will still be Mahama but this time with vengeance!

Anyone who will speak against the National Cathedral will di...
24 minutes ago